During the pandemic, the Video Club has increased our service to the community by creating two new series’ for Village Television – “Beyond the Gates,” which takes viewers to nearby places of interest every month, and “Video Club Spotlight,” which presents monthly collections of short videos by club members. Before COVID we produced two other shows currently in rotation on VTV – while club members and instructors continue to host or produce the additional shows listed below.

VIDEO CLUB SPOTLIGHT – New anthology show features videos by Video Club members. Spotlight # 5 (November) contains three separate videos: (1) a short video covering a late afternoon/evening visit to the Laguna Beach beach filmed by Starkey. Starkey does a good job of filming the mood of a place and then creating a complete video from this material. (2) Gila and Jules Zalon are featured in this description of how to make sauerkraut from scratch. These two videos were each shot with an iPhone. (3) Fred Harshbarger was on a tour in Egypt when he saw an interesting, spinning dancer. He grabbed his point-and-shoot pocket camera and filmed the event.

Spotlight # 6 (December) contains two videos created, in part, by Video Club members. (1) This video was written by Gila Zalon with the idea of making  a full commercial, professional video. Her funding fell through, so she rewrote the script for a much shorter version – but it still used professional actors. It is called “Pandora’s Box.” (2) The second film in this Spotlight is a documentary showing the BMX Pro Trick Riders at the 2019 National Association of Broadcasters convention in Las Vegas.  These young men are experts in skate boarding and trick bicycle riding. Fred Harshbarger did this one.

WELCOME TO MY HOME – Sharing the cultures (and foods) of residents born abroad. November’s show will be a repeat of last year’s Thanksgiving-themed program. In December, Village residents share their holiday traditions, including Kwanza, Hanukkuh, and more – a repeat of last year’s show. Producer: Video Club member Susanne Savlov.
Mondays at 9:30 pm, Thursdays at 10 am.  Produced by Video Club’s Video One Productions. 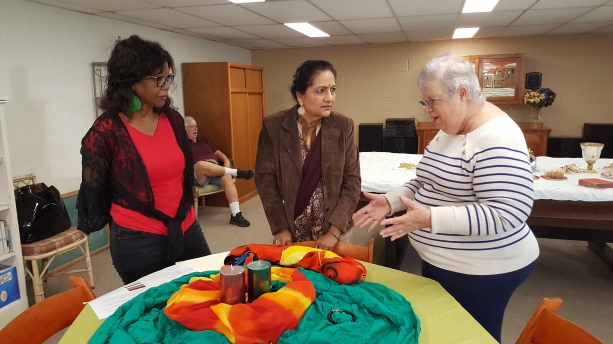 DISCOVERING LAGUNA WOODS – What’s new and interesting in the Village? Called to service! In November, Host Cyndee Whitney (right) talks with LaVal Brewer, South County Outreach President and CEO, and ICU nurse, Jason Whitney. LaVal has been in his position since June and is enthusiastically implementing new ideas as well as keeping the Orange County informed as to the ongoing need. Jason gives us a glimpse into the life of a front-line essential worker during this pandemic. He speaks to the challenges of both treating COVID patients and managing family life at home. Jason is Cyndee’s son. Host: club member Cyndee Whitney.
Wednesdays and Sundays at 9:30 am.  Produced by Village Television.
Past playlist available on the Village TV YouTube channel.

THE WRITE NOW SHOW – Meet local authors and other creative personalities. “The Write Now” show is using Zoom to capture new interviews with writers and other creatives. Hosts: club members Charlie Redner and Judy Saxon.
Mondays at 11:30 am, Fridays at 10:30 am.  Produced by Village Television.
Past playlist available on the Village TV YouTube channel.

THE THRIVE SHOW – Thriving in the Village from many points of view. November features the Village Garden Centers, a repeat from 2017.
Thursdays at 9:30 am, Sundays at 10:30 am. Produced by professional videographer Scott Marvel, a Video Club instructor and Past-President.
Past playlist  available on the Village TV YouTube channel.