Click above to see new video on making videos with your smartphone (posted 3/3/18).

The Video Club maintains a YouTube channel containing about 200 videos, managed by Chuck Hale, who organized the videos using four key words: awards, tutorials, projects, and people.  See photo below of Chuck explaining the channel at an April 13, 2017, Board Meeting. 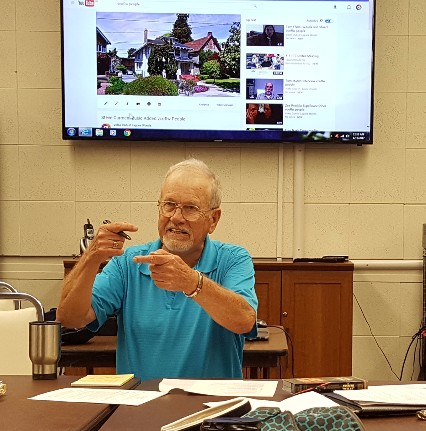 In addition to managing the YouTube channel, Chuck’s other services to the Video Club include teaching a popular course in how to use YouTube (with his own video tutorials), helping manage Video Lab computers, teaching PC photo and file management, and providing individual coaching in Pinnacle video editing. For info about the club’s YouTube channel or to submit a video for uploading, please contact Chuck at Classic2@comline.com, 949-770-4589.

NOTE: Chuck has placed a large supply of copyright-free music from the YouTube Audio Library on all Lab computers. Help yourself — or visit the source.

Scott Marvel, a Village resident, professional videographer, and Video Club Past-President, has produced some 30 half-hour “Thrive Shows” for Village Television. The ongoing series is created as part of a Village-wide Thrive Task Force effort to show how residents thrive in our community. You can view the full lineup of these inspiring shows on YouTube.

Led by Fred Harshbarger as producer, director, and editor, in October, 2018, the club’s Video One Productions team completed this 28:29-minute video of The Woods Combo, a popular Laguna Woods Village Jazz group. The video was the result of shooting at several summer performances at Clubhouse One. Woods Combo members are Mark Hochberg, keyboard; Dutch Fisser, bass; Bill Hemberger (a Video One Productions member), drums; and Moqui Lund, vocals. Mark, Dutch, and Bill are Village residents.

The video above was a class-assignment for the Video Club class described below. It was shot and edited on a Samsung Galaxy S6 smartphone using a free version of the Android app Kinemaster. More photos from the class may be seen in the gallery below. Scott will repeat the class starting June 1, 2018, re-titled as “Making Amazing Videos with Your Smartphone.” Click here for class schedule.

NEW CLASS: “Making Travel Videos That People LOVE”
4 sessions. Instructor SCOTT MARVEL says: “I want to help everyone in the Village who has a smartphone (or any camera that shoots video) learn how to tell the story in the camera. That’s the goal of this class. I’m going to give you the mindset to help you get good at making videos that are not boring. You’ll a make your own video in class. We’ll be focusing on travel, but the same guidelines apply elsewhere. Every shot has to count. When you’re done shooting, I’ll teach you how to edit on your smartphone. Bring your clips into the editing program. Review them and make a rough-cut of your movie. Then re-arrange your clips for maximum impact and eliminate unwanted footage. Finally, add titles, music, and narration. Quickly create and share a short, interesting travel video that people will LOVE TO WATCH!” Open to any resident who has an Apple or Android smartphone or other camera that shoots video. Editing emphasis will be on editing with your smartphone. Scott Marvel – Fridays, January 5, 12, 19, 26; 9:30 am-noon;
Video Lab and Studio

To open the gallery below, click on any photo. To close it, click “X” in upper right corner.

Celebration of the Life of Denny Welch —  Producers Lucy Parker and Betsy Martin created two videos from this event.

The first video is a record of the November 4, 2017, service celebrating the life of longtime Village community leader Denise “Denny” Welch, who died October 3, 2017. For info about obtaining a copy of this 45-minute video, contact Lucy Parker, lvparker@gmail.com, 949-456-4657. The second video is a compilation of  memories shared by friends and family attending the service.  This 30-minute video, “Remembering Denny Welch,” was aired during December, 2017, on Village Television and  may be viewed online at https://youtu.be/py4x_Ixu_WQ .

Click here to view another short video made by Stephanie to promote her Apple “Clips” video editing class. Stills from the video (below) demonstrate some of Clip’s features. 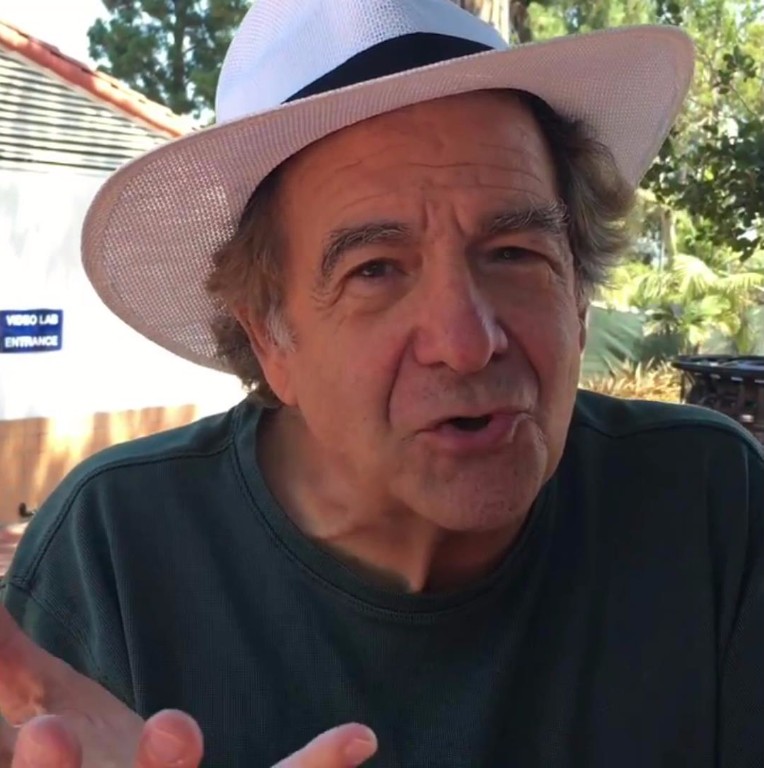 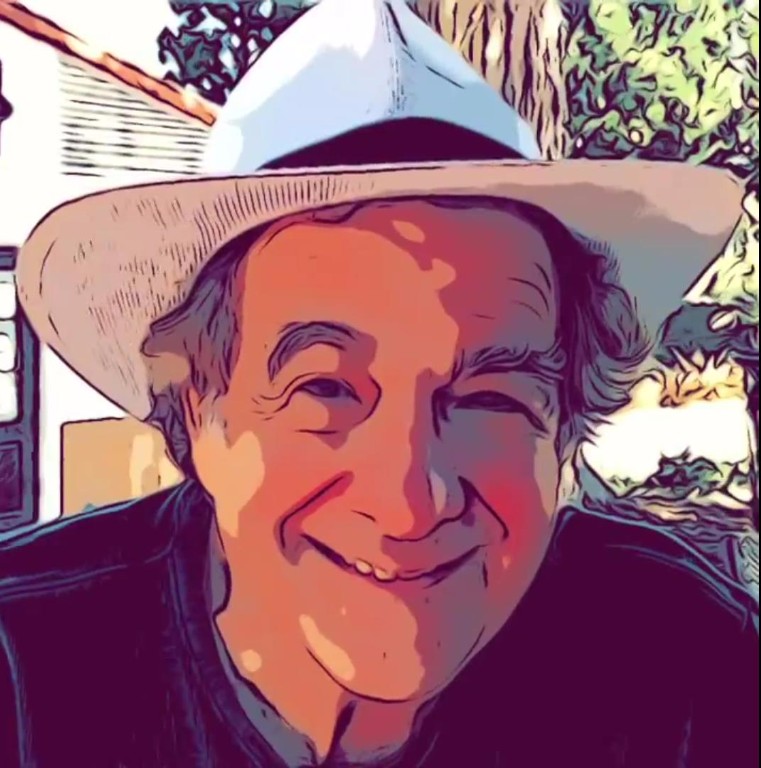 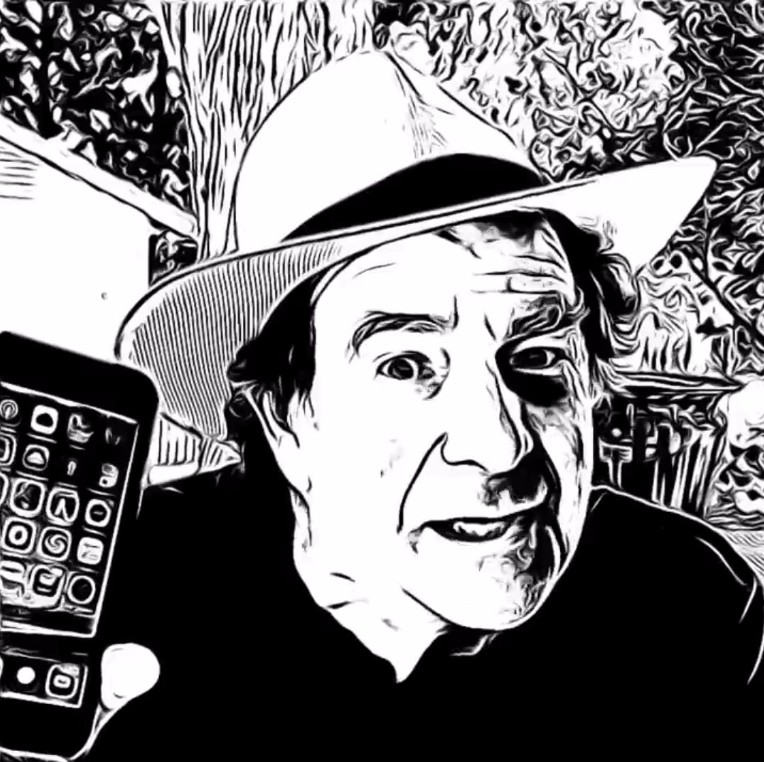 THE WRITE NOW SHOW – Meet local authors. Sundays at 12:30 am, Mondays at 11 am, Fridays at 10:30 am. Hosts: Video Club Members Charlie Redner and Judy Saxon – Produced by Village Television