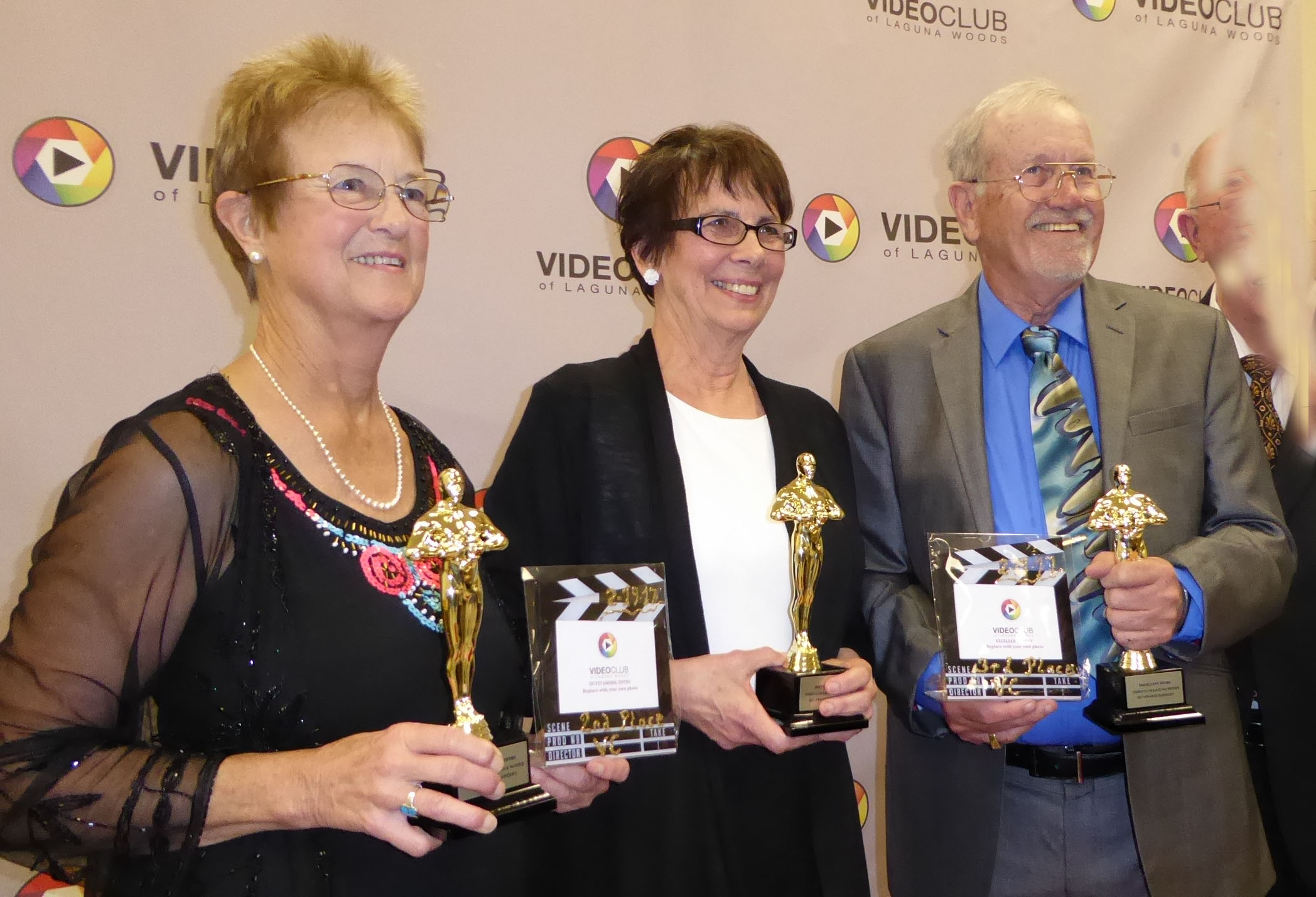 Sheryl Martin, Betsy Martin, Chuck Hale Were “Win/ Place/ Show” at Awards Banquet
To access banquet photos by Tom Nash, Barbel Dagostino, and Lucy Parker online at the club’s Google Photos site, follow the links below. You can download and print or otherwise share pictures of you and your guests! 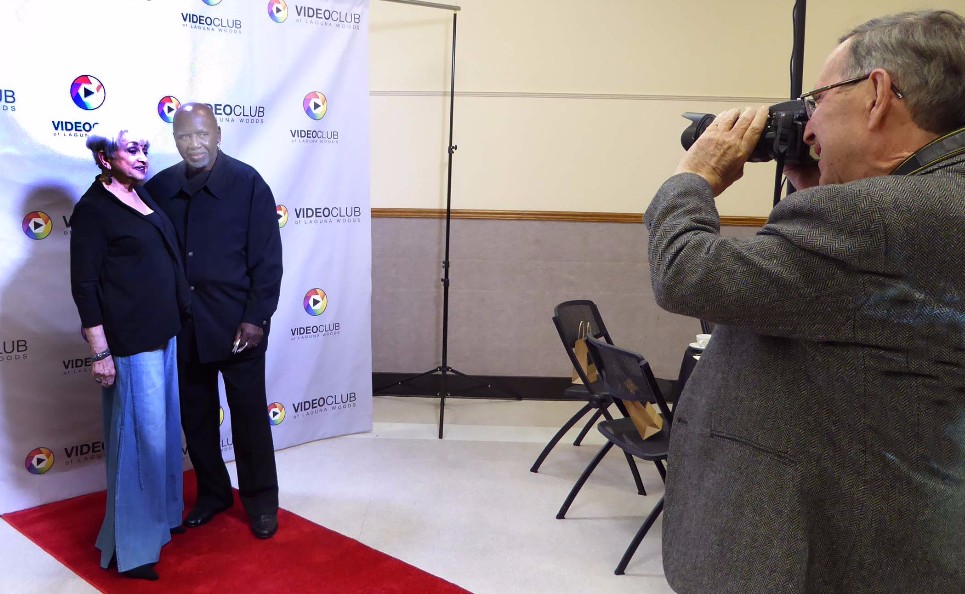 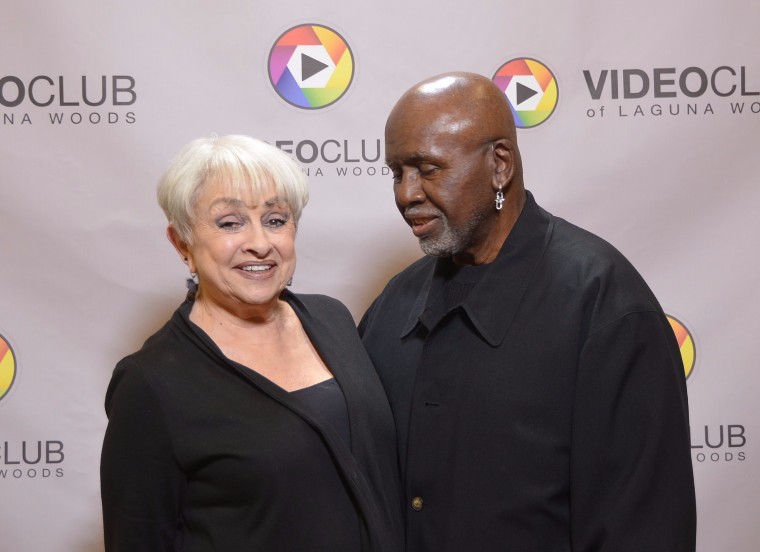 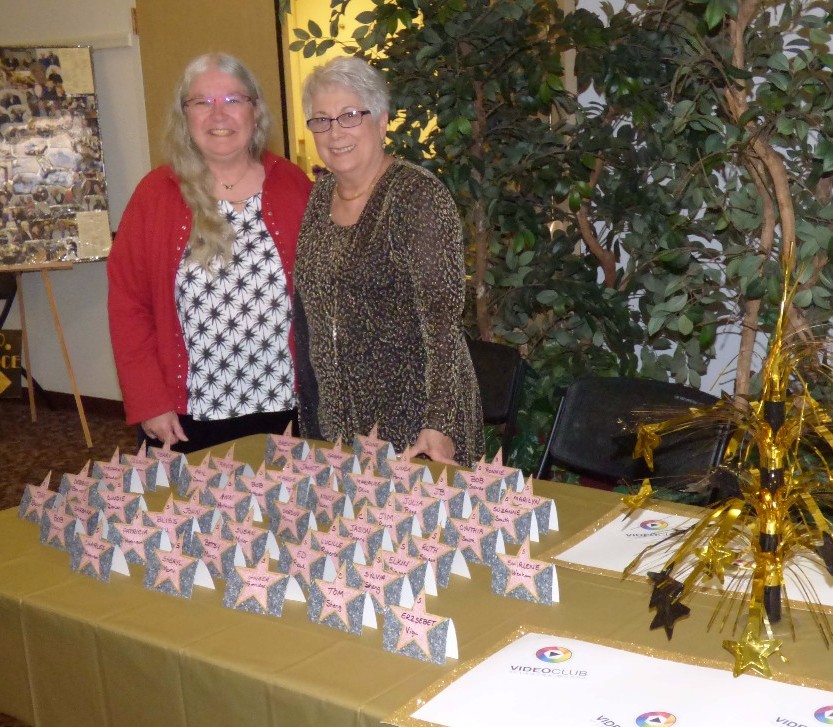 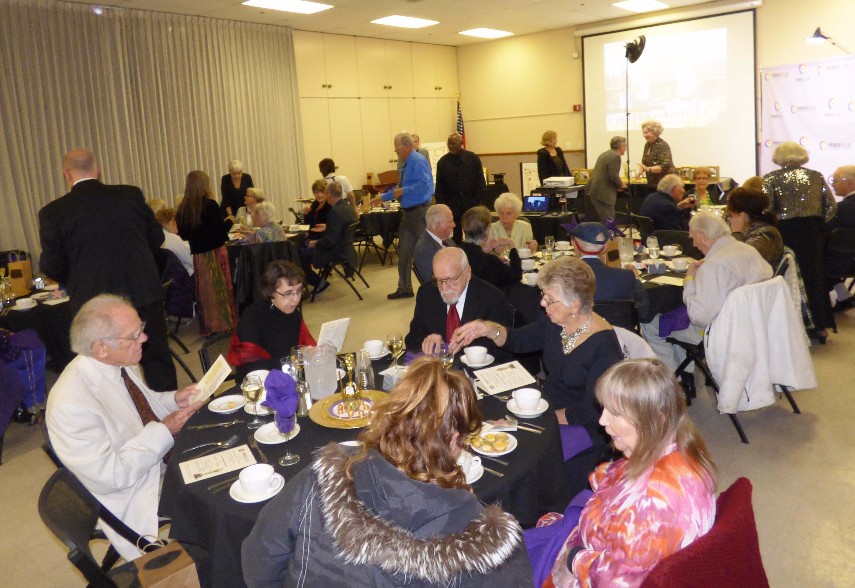 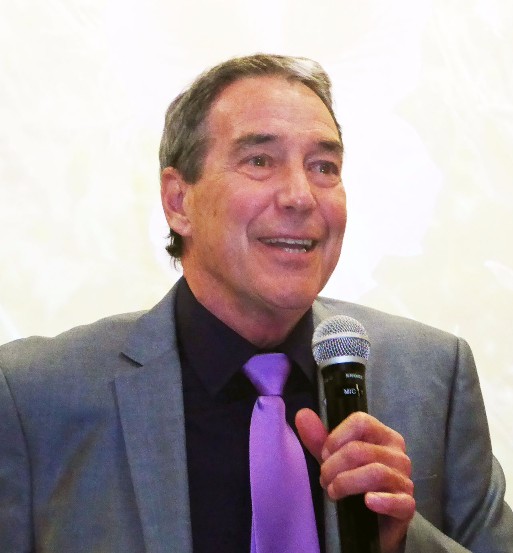 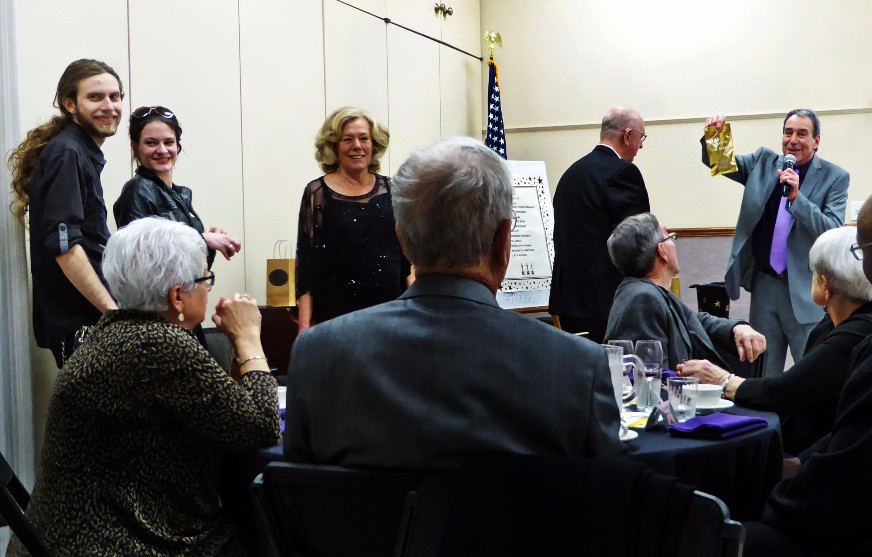 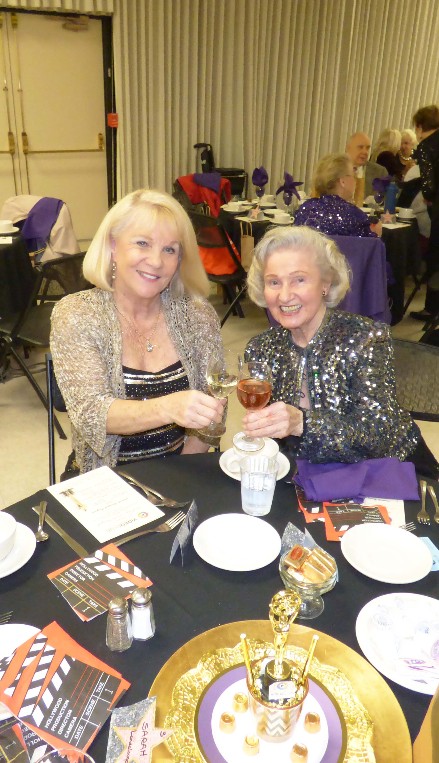 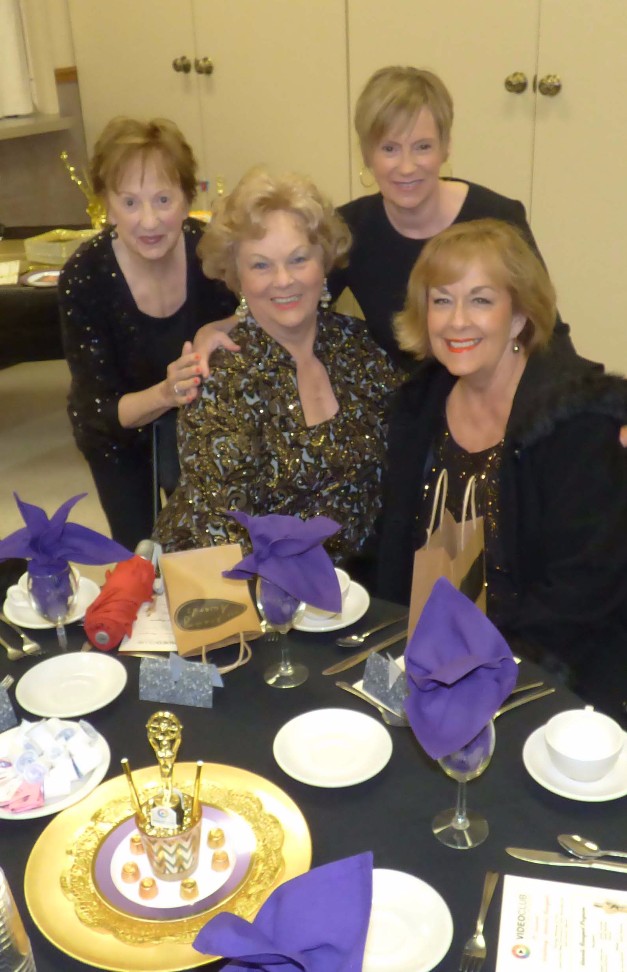 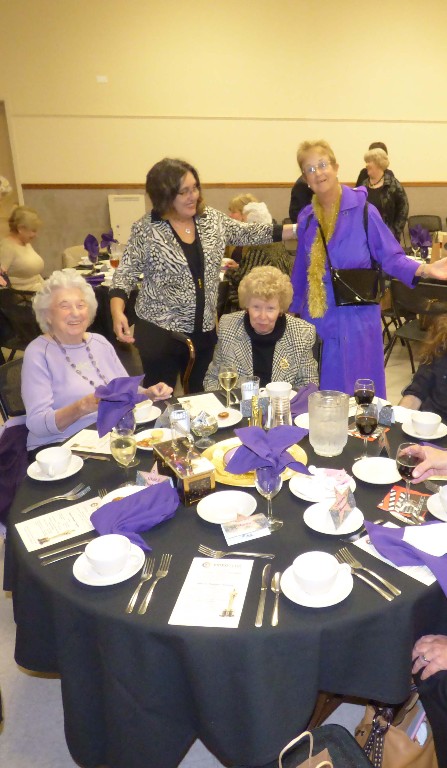 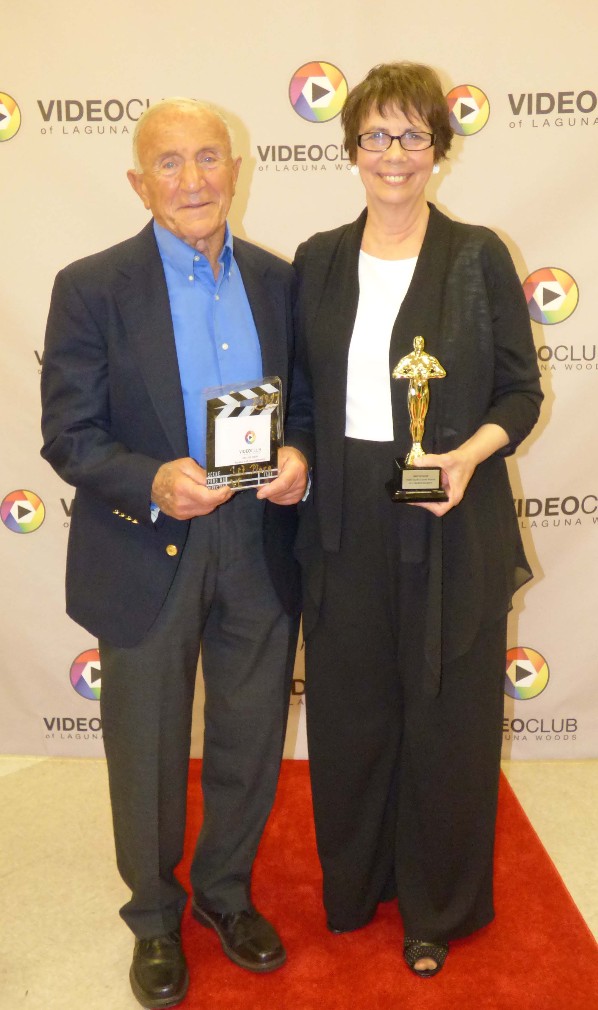 Tom Nash again operated the VIP portrait booth, taking photos of guests. David Dearing was a hit in his first turn as banquet emcee. Banquet chair Barbel Dagostino’s plan for a sit-down dinner was well-received — speedily served by Jolanda’s Catering. A special Video Club cake capped the meal. Joan Carman managed reservations and served with Membership Director Evelyn Chang at the reception table. Another 2017 banquet innovation was door prizes donated by local businesses, Prizes were solicited by Barbel and Stephanie Brasher, whose guests assisted in distributing them to lucky winners, as seen in photo above.

For a copy of the banquet program with all acknowledgments, click here. 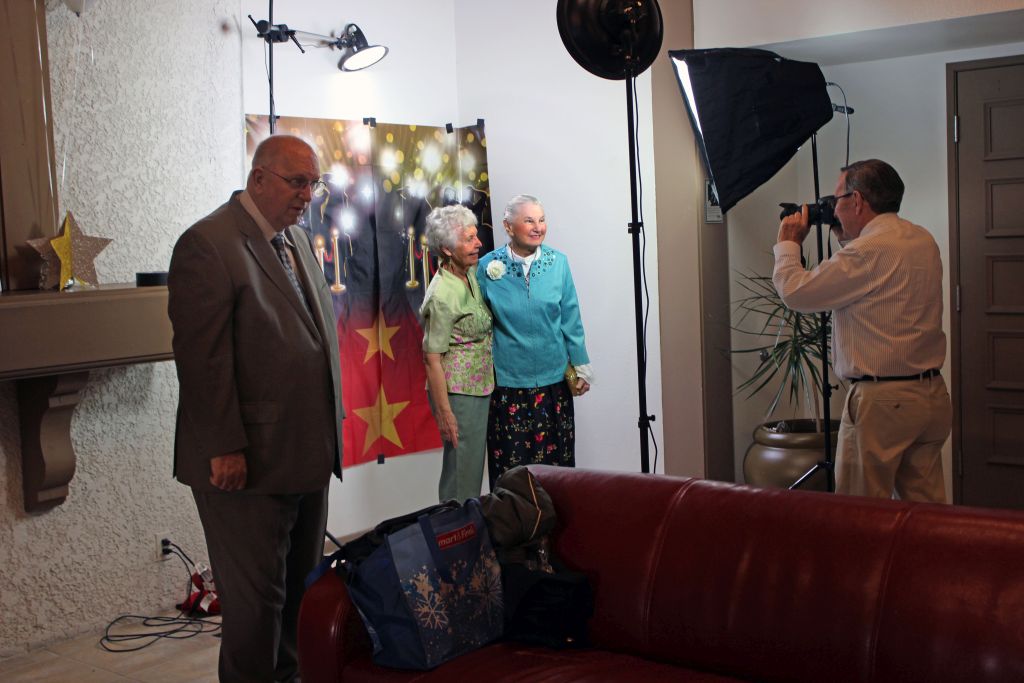 NOTICE: 267 photos from our Awards Banquet – including guest portraits by Tom Nash; candids by Mike Evans, Barbel Dagostino, and Tom; and program pix by Mike, Barbel, and Lucy Parker – are now on the Video Club’s new Google Photos sitefor everyone to enjoy.

TIP: If you agree to accept “high quality” rather than requiring “original size” for your files, Google will give you UNLIMITED free online storage for your photos AND VIDEOS, fully synced with your devices.Whatta deal!

Click the following links to see our banquet photos:

Each of these URLs links to an album – and anyone who has the link can access, view, and download any banquet photo. Many thanks to our photographers! 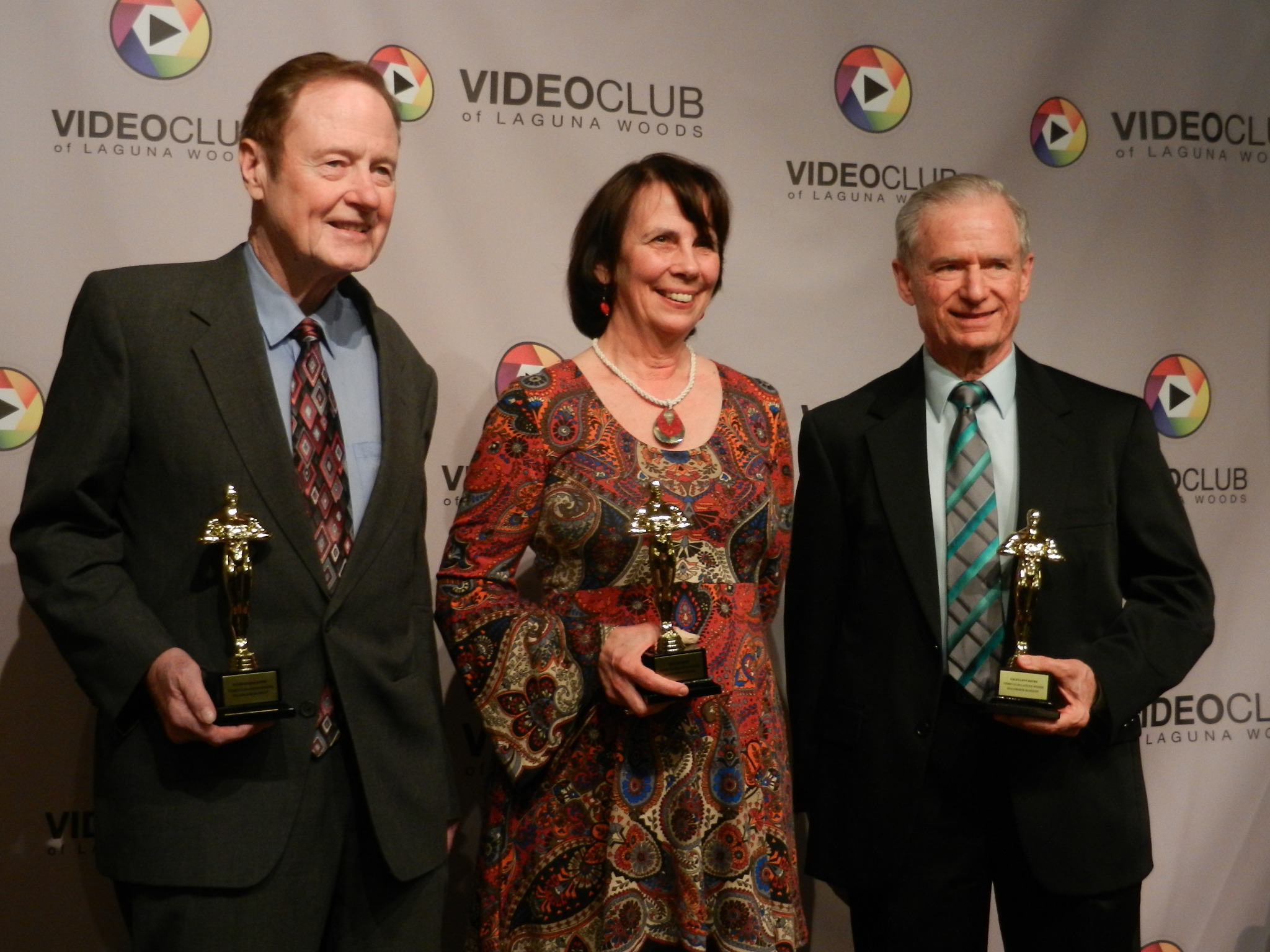 Top awards in the Video Club’s 2015 Annual Short Video Contest went to Sheryl Martin (First Place, for “Living My Inner Cowgirl,” a dream trip to a dude ranch), Jim Baker (left) (Second Place, for “America,” a scenic photo tribute), and Danny Sciupac,(right)  (Third Place, for “Life Lessons,” inspirational guidance from the wisdom of children). Winners were chosen from the top 10 four-minute videos (selected out of 16 submitted in the contest) when attendees voted at the club’s Sixth Annual “Academy” Awards Banquet, held January 23 in Clubhouse 6. 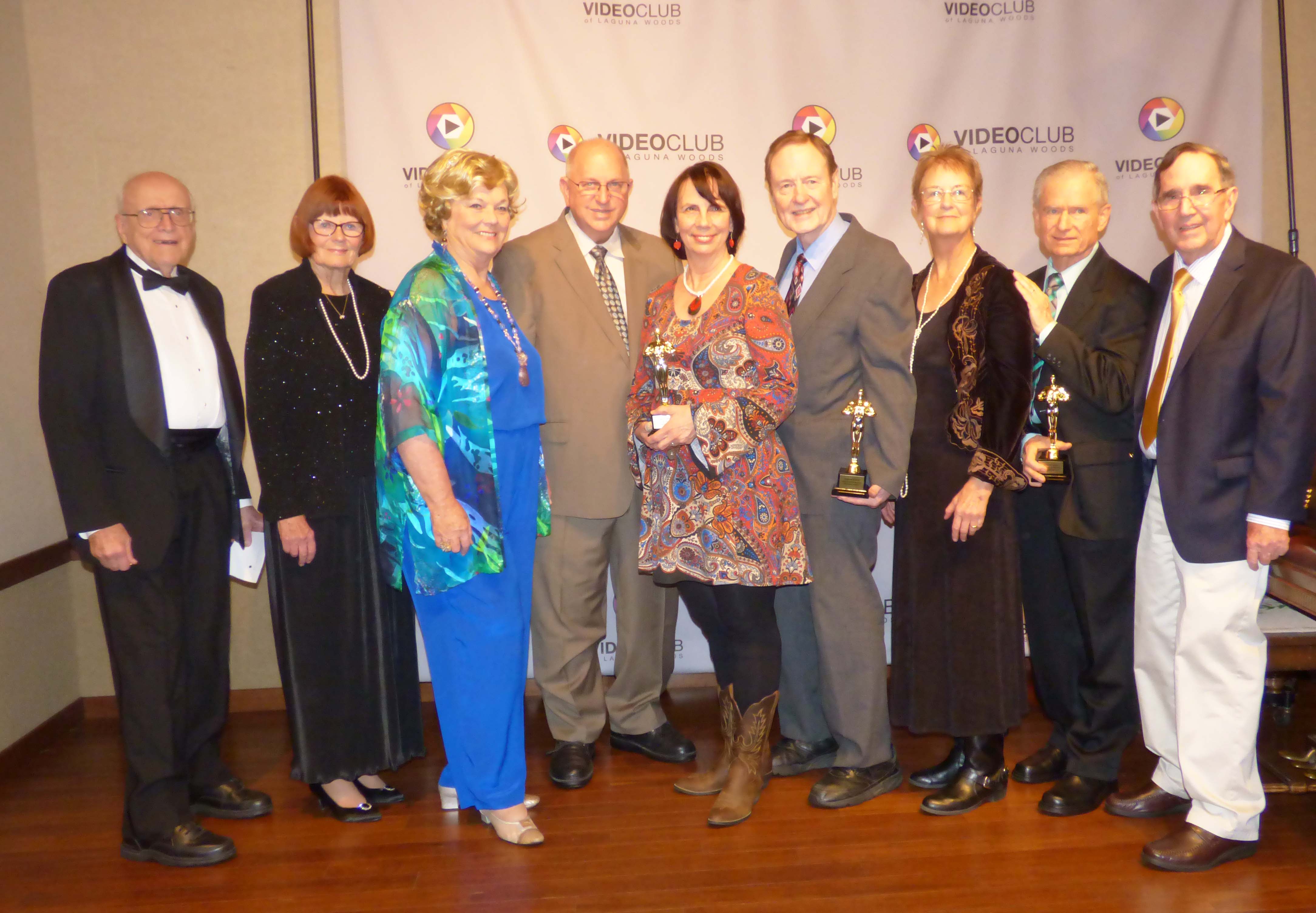 Other contestants whose videos were shown at the banquet were (from left) Bob D’Evelyn, “Boating Up the Sungai Temburong River”; Linda Lenthall, “Myanmar”; Marge Kinney, “Courage to Start, Strength to Finish”; Steve Carman, “Christmas Miracle on the Way to Mars”; Betsy Martin, “A Hunk of Clay”; and Tom Nash, “Trees.” Pat Burr, whose “Festival at Erumely” was also in the top 10, could not attend. 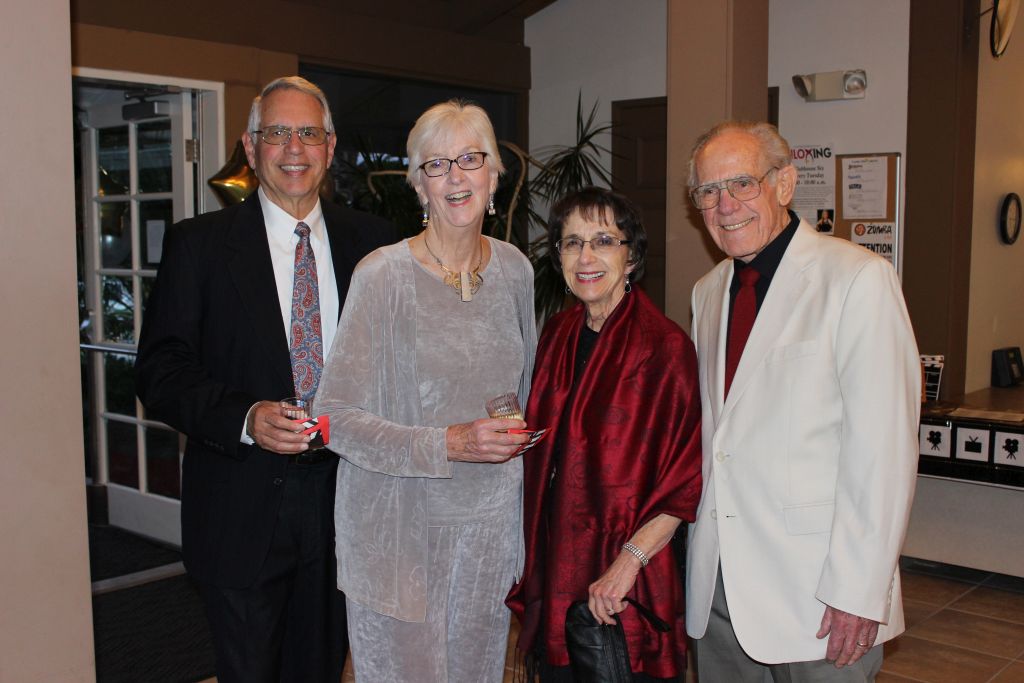 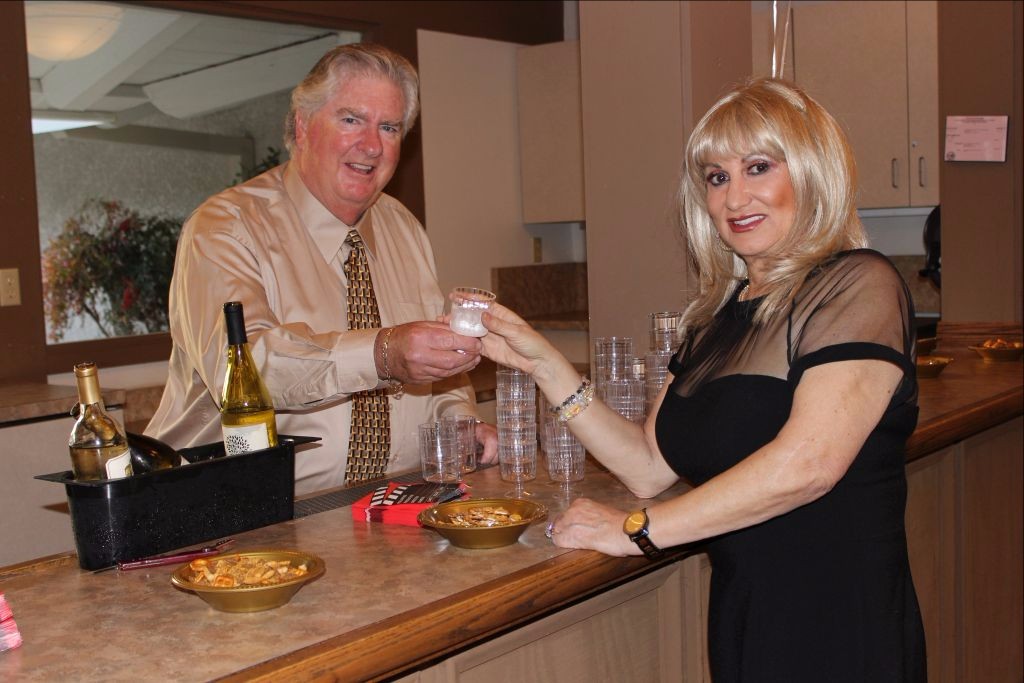 Kudos for the successful evening came from many members. Said Bliss Hill, who recently stepped down after several years as Hospitality Director: “The Awards Banquet was a big success! It was nice socializing in the entrance room and having pictures taken. The food was great and the dining room worked well for the rewards presentations and dinner. The pretty gift bags and contents were lovely. The videos were great. It was really hard to choose a best one. I had feared the CH 6 dining room would be too small but it worked perfectly, since people were able to walk about and chat in the outer room before dinner. (Norma Benner) did a fabulous job as coordinator as did (her) helpers. John and I had a wonderful time.” 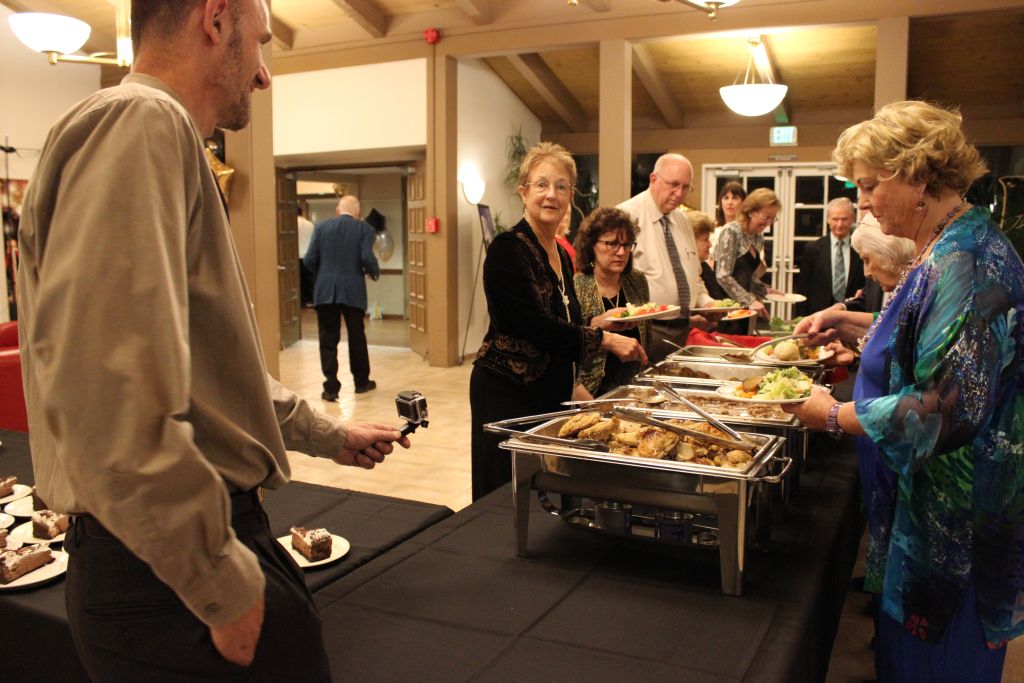 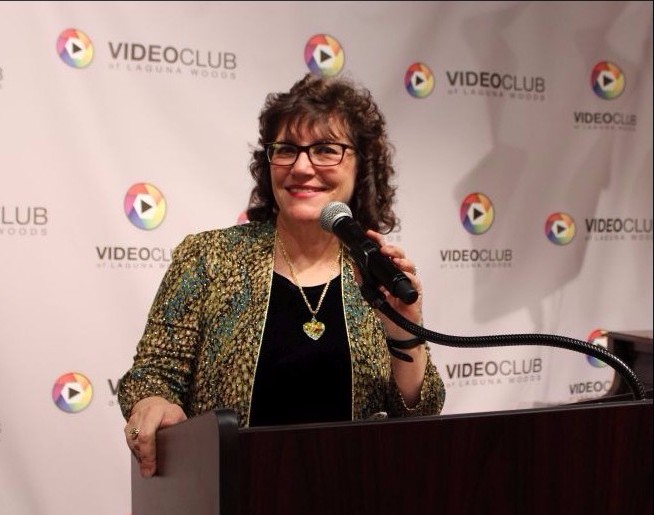 Norma responded in kind with a message to her team: 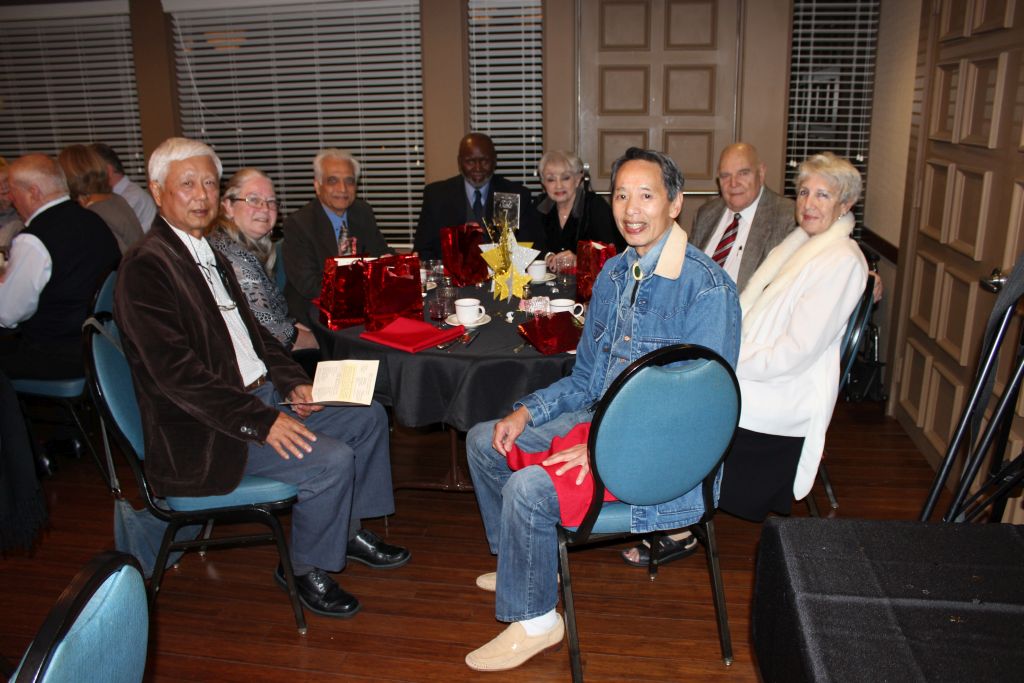 “Bliss Hill’s assessment reflects that of many who attended last night’s party…You all worked so hard to make the evening special and it was (in my opinion) the best ever! Last year’s party coordinators introduced creative improvements such as special envelopes for the winners (just like the at the Hollywood Oscars!) and hand-crafted glittered table numbers. This year, Chuck Hale and Roland Harrison saved the day by re-doing DVDs which would only play on computers. Tom Nash and Mike Evans took pictures and Alan Goldman helped to bring needed equipment from the Lab. Mike Bajc (of Digital Arts Plus in Mission Viejo) brought all of his equipment for videoing our party. 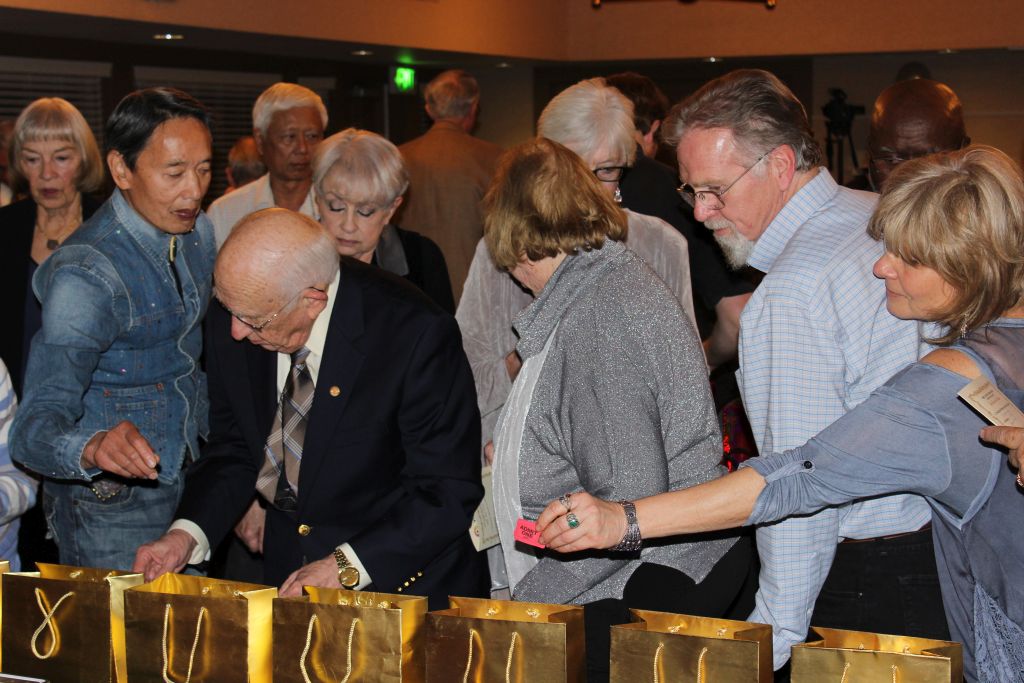 “Gloria’s balloons and gift bags were innovative, took a lot of time and effort, but created a great party ambiance. The tables were stunningly decorated thanks to Joan Carman’s creative touches. Danny Suipac accepted the last-minute challenge to provide dinner music; the Lenthalls provided their equipment and expertise for showing the videos. President Steve Carman engaged a sound technician, arranged for the location, took care of paying the caterer, and finessed the information on Lucy Parker’s stunning party programs. Bonnie Beaux Fullerton was MC extraordinaire! Also, Betsy Martin had made sure the Clubhouse got the plan with our needs completed and submitted. Evelyn recorded incoming funds and (she and John) helped guests find their table assignments. You’ve set a high bar for successful parties, but now there is a blueprint to make planning easier for next year’s planners. Thank you all so much!”
Acknowledging Norma’s efforts, Steve weighed in: “No one worked harder than you to make the Video Club ‘Academy’ Awards evening the great success that it was! Thank you for your leadership of the team that you praised…. I truly appreciate you and hope that you will now find time to relax and unwind from the big event.” Tom Nash Outlined Plans for Instruction at January 17, 2015 Awards Banquet The Video Club’s new Vice President Tom Nash (top left in collage below) took the podium on behalf of incoming President (Steve Carman (inset) to outline new educational plans at our successful 5th Annual “Academy” Awards Banquet Saturday, January 17, in Clubhouse 7.. Emphasis will be on individualized “coaching.” Health issues prevented Steve from attending, but he was there in spirit with wife Joan, who will co-head Hospitality with Bliss Hill this year. Outgoing President Lucy Parker thanked many volunteers in her summary of the club’s accomplishments during 2014 and put special emphasis on creative progress in the Video Studio. 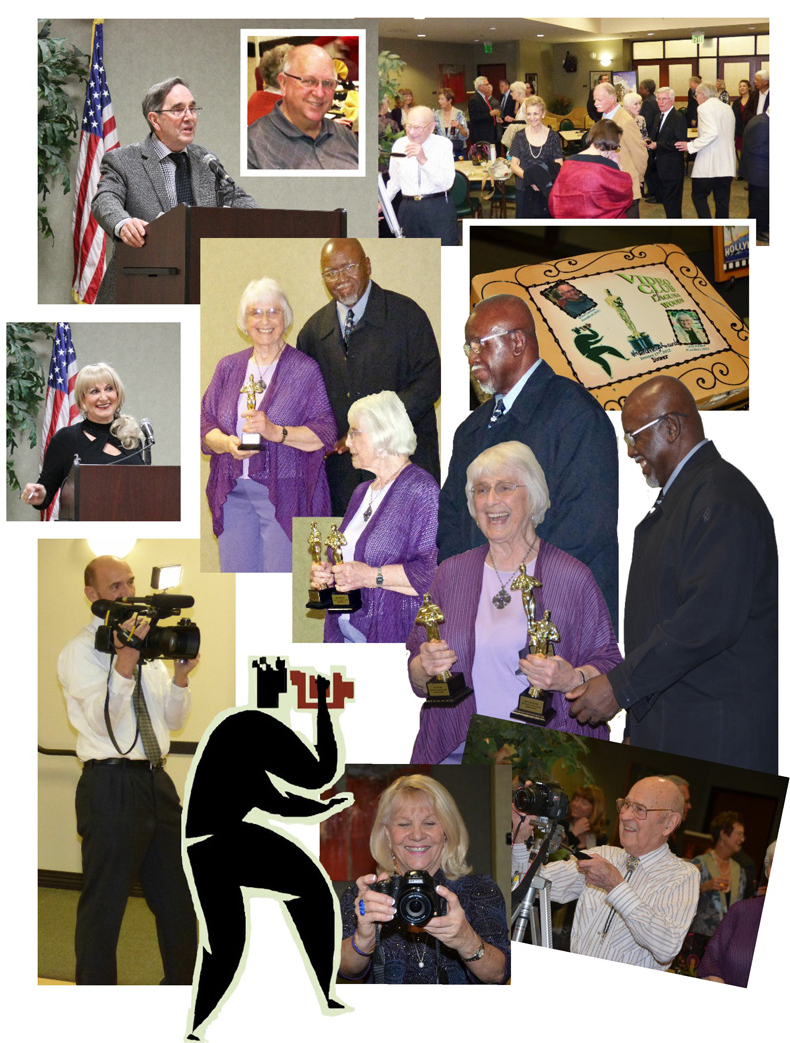 Gloria D’Simone-Shute (above left) kept the evening lively as our emcee. Lots of photographers were on hand, including Mike Bajc (bottom left) Mike Evans (bottom right), “you-know-who” — our club’s old logo in one of his final appearances, and Barbel Dagostino (center, who did a fabulous job as our Banquet Chair),  One of Barbel’s many contributions to the evening was the unusual chocolate raspberry cake (above right) decorated with photos of our incoming and outgoing Presidents.
Short Video Contest Winners Announced in the Short Video Contest, Lucy Parker and Linda Lenthall tied for Best Picture among nine entries with their videos “Little Things” and “Mahale.” Linda was on a five-month trip and could not attend. The surprise of the evening was that Lucy also won in “Oscars” in Videography and Editing, resulting in the armload of trophies (above) being presented by Contest Coordinator Roland Harrison. Other contestants were Ken Tsai, Danny Sciupac, Bob D’Evelyn, Betsy Martin, Chuck Hale, Pat Burr, and Jim Baker with videos on a wide range of subjects from travel to animals to fishing to humor, including animation, an air-sea rescue, and a even a Western “horse opry.”