Burial at sea on January 20, 2019, provided a moving tribute to Gary Simpson, a Village resident and the Video Club’s Membership Director, who died in his sleep on January 13. Gary moved to the Village in 2009 after spending most of his adult life in Laguna Beach and was devoted to sailing and the ocean. During a treasured 10-year period in Hawaii, where three of his four children were born, Gary maintained a 40-foot sailing boat.

For the ceremony, a dozen family members sailed out of Long Beach Harbor to sea, where Gary’s former wife, Sandra Simpson, committed his ashes, mixed with soil Gary had collected from 196 countries for his CommonGround art project. In spite of rainy weather, the day of the event was sunny, and those present reported that Gary’s ashes formed a haze as clumps of the collected soil floated on the water.

Gary’s business career was as a contractor and manufacturer of country counter tops, He also exhibited his artwork in the Sawdust Festival in the ’70s and the Laguna Beach Festival of the Arts in the late ’90s. He had learned the building trades working in his father’s plastering business in Laguna Beach and gained his lifelong interest in art from his mother, His preferred medium was concrete.

Miranda McPhee, a Village resident and friend of Gary’s, included an inspiring description of his CommonGround art project (concept photo below) in her recent Facebook post, below. 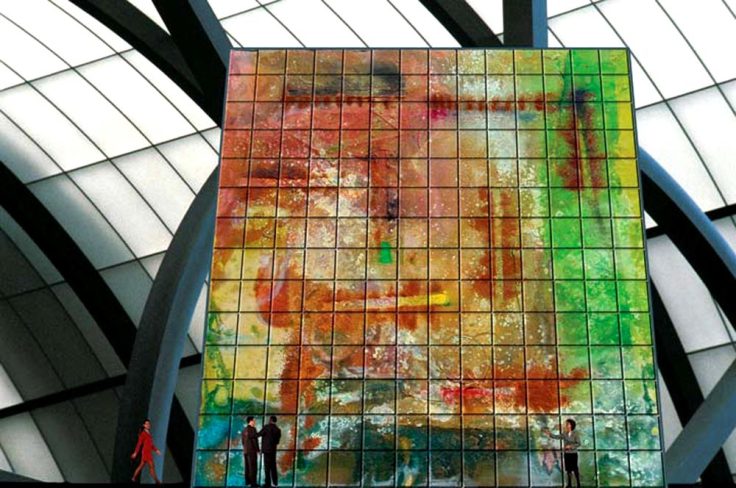 Miranda wrote: “I am deeply saddened to hear of Gary’s passing. He was a wonderful neighbor, so kind, unassuming, considerate, and quick to offer help; he will be sorely missed. One of the clubs in Laguna Woods to which I belong publishes an annual anthology of short stories. Last month (December, 2018) we published Village Stories 2018 and I included, with his blessing, a short story about Gary’s work. I thought you all might like to read it so I include it here. I hope someone can finish his incredible project:”

Dishing the Dirt on My Neighbor
by Miranda McPhee

I’m not usually one to dish the dirt, but (with his permission) I’d like to make an exception about my neighbor upstairs, Gary Simpson. He’s an artist and man of the earth—literally, as he’s incorporating soil from around the word into a single work of art. As he says,“ We build our homes on it (and of it), grow our food in it, spill our blood over it. We parcel it out to nations and individuals, but the geologic forces of the earth redistribute it without regard for our boundaries.”

Over the past fifteen years, Gary has collected soil samples from all 193 countries in the United Nations for his large-scale art project—a series of 196 abstract panels created with a mixture of soil; our common ground. Bearing in mind that some of these countries (e.g. Cuba, Burma, Iran, North Korea, Sudan, Syria) were alternatively sanctioned, unfriendly, war-torn, or way off the beaten track, it’s an impressive feat.

What’s the fascination, I hear you think, dirt’s dirt, right? Wrong. There’s soil from Auschwitz and Hiroshima, which will always weigh heavily on our conscience; Robben Island, where Nelson Mandela was imprisoned; Pablo Neruda’s garden in Chile; tiny Tuvalu, which may well be the first island to disappear due to rising sea levels; and soil collected by eighth-graders of a school on the site of an airstrip built by the U.S. Navy in WW2 in the Marshall Islands. So many personally or historically significant sites whose pinprick on the world map does no justice to their lasting impact on history, religion, culture, geography, nature, commerce, or society.

Each site was selected for a reason, and every collection has an accompanying story and photos, which make a collage of fascinating reading (www.commonground191.com). The gathering of a handful of soil morphs into an appreciation of this project’s scale and scope, and highlights its importance for the hundreds of soil-gathering volunteers across the world.

By the way, you can’t just pick up a handful of earth and put it in your pocket while on vacation, or have a local person mail it to the United States. There are stringent conditions. An import permit is first required from the U.S. Department of Agriculture to receive soil from each country. A collection package is then sent out along with the collection jar, extensive documentation, and a DHL return waybill. The incoming soil is then sterilized by the USDA before arriving on Gary’s doorstep.

Nothing is particularly straightforward—one small jar of soil went from Ouagadougou in Burkina Faso (Africa) to Lagos (Nigeria) to Amsterdam (Netherlands) to Wilmington (OH) to Hawthorne (CA) to the Common Ground HQ in Laguna Beach. Moreover, it is not cheap; twenty-six thousand dollars’ worth of shipping costs later, Gary’s soil collection phase is approaching completion, including the two countries that joined the UN since he started the project in 2002.  And twenty-six countries have two or three soil collections in order to add depth to his artistic story which is in progress. Gary aims to complete the actual production of the 196 panels by September 11, 2021. Together they will measure 50’ x 50’, i.e. huge.  It’s a labor of love, for sure, and the finished work will envelop us all.