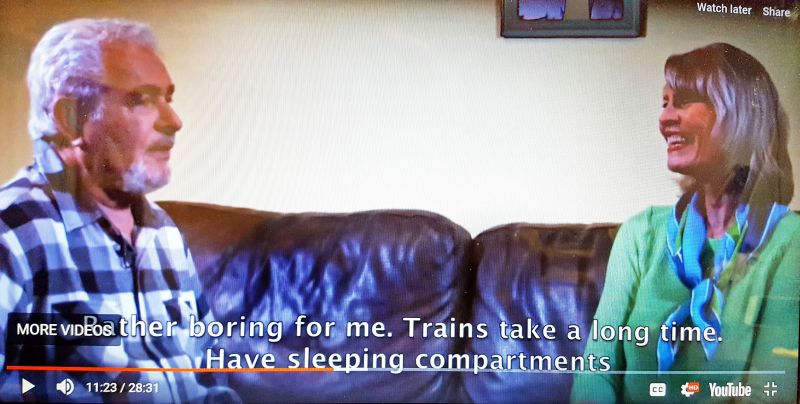 The Video Club will again be well-represented on Village Television in May, 2019.

WELCOME TO MY HOME – Mondays at 9:30 pm, Thursdays at 10 am – Produced by Video One Productions. Producer: Susanne Savlov.

In May, “Welcome to my Home” host Tracey Stewart visits Vladimir Mansky from Russia (above). Vladimir tells of a hard life growing up in the Soviet Union after WWII. He and his family lived near Odessa in Ukraine. As a teenager and with limited schooling, he became a fashion designer for women’s and men’s shoes, inspired by pictures he saw in German, Polish, and American magazines. He was later able to finish high school at night, while working nine hours a day six days a week in the shoe factory.

Vladimir next spent three years in the Army, where he became skilled in horsemanship while guarding the Russia-Pakistan border. After his military service, he returned to the shoe factory in Odessa, using his income to help his family. He later met and married Klara, a dress designer from a nearby factory. Frustrated working on machine-made shoes when he preferred to make quality shoes by hand, Vladimir changed careers and began delivering gas tanks while attending night college.

In 1974, Vladimir and Klara made a major decision, determining that they would leave Russia with their daughter. On the pretext of visiting Klara’s relatives in Israel, they went instead to the American Embassy in Vienna and eventually were allowed to come to the United States. They lived in New York and Kansas before moving to California.

Following the interview, Tracey and Vladimir join Klara and the video crew around the Manskys’ dining table for some delicious Russian food, including Ukrainian-style borscht.

THE THRIVE SHOW – Thursdays at 9:30 am, Sundays at 10:30 am – Produced by Video Club Member and Instructor Scott Marvel.

A playlist of “Thrive Shows” is available on the Village Television YouTube channel.

This month’s title is “O to Be One Hundred and Three!” In May, Thrive host Dorothy Pacella shares her strategies for living in the Village with her husband till they’re 103 years old.

A playlist of nine “Discovering Laguna Woods” segments is available on the Village Television YouTube channel.

Charlie and Judy interview talented artist Dawn Malcolm. Dawn was educated as a biologist, but she’s an illustrator and sculptor by design. “Diverse mythic sources inform her functional ware, sculptures, and tile work as she scaffolds her own stories through clay.”