“Over 15 students attended the joint Mac/Video Club iMovie Trailer class on January 10, (shown below with instructors Steve Carman at left and Ron Plain at right).  Excited about this app, the students were eager for a second class.  A class has been scheduled for Wednesday, February 7,  from 1:00-2:30 p.m. in the Mac Learning Center on the third floor of the Community Center.  This class will focus on fine-tuning an iMovie Trailer and will also offer tips and suggestions for working on video projects.” 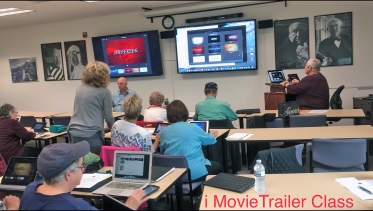 The idea of a joint Mac/Video Club class was engineered by longtime Mac Club Instructor Ron Plain and Video Club President Steve Carman to take advantage of the Mac Learning Center’s many late-model Mac computers and to make the training more readily available to Mac Club members. Ron and Steve taught an iMovie class together in the Video Lab last fall and are co-teaching the new course. Video Club Secretary Stephanie Brasher, a Mac Club Supervisor, is supporting the class with a promo video on her YouTube channel, Second Chance Productions.

Stephanie reports that Steve and Ron are still evaluating student response to determine whether or not the class will be continued monthly. If you’re an iPhone, iPad, or Macintosh computer user and want to learn video editing, be sure to attend.