VIEW AND DOWNLOAD BANQUET PHOTOS!
Photo portraits of guests, plus candid shots by Andre Torng – a total of 142 photos – are available at Andre’s online site:
https://ocnature.smugmug.com/LagunaWoods/02-16-19-LW-Video-Academy-Award/

Thirty-four shots from the banquet reception by Stephanie Brasher are available on the Video Club’s Google Photos site:

Photos below are by Andre Torng and Stephanie Brasher. 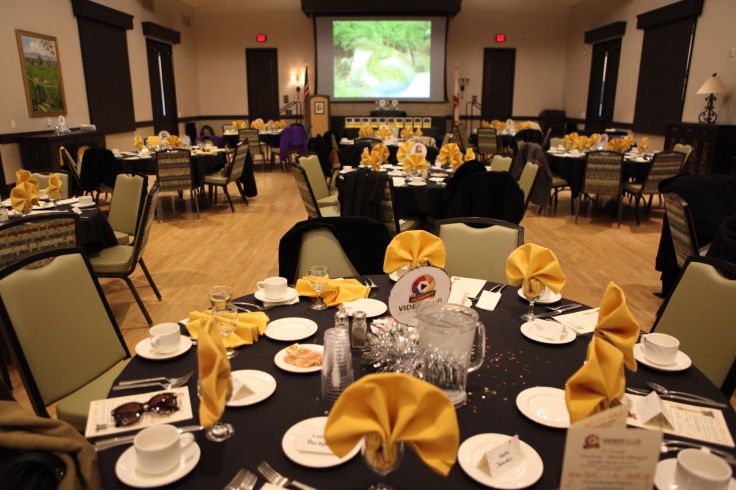 A good time was had by all at the Video Club’s 9th Annual “Academy” Awards Banquet on Saturday, February 16, in Clubhouse 2’s Sequoia Ballroom. Winners of the Annual Short Video Contest (top of page, from left) were Sheryl Martin and Jeanne Mayer, second place, for their comedic infomercial, “Jeanne’s Makeup Moment”; June Rose Davis, first place, for her gentle tribute to “Magical Aliso Creek”; and Wolfgang Kuitter, third place, for his scenic river voyage, “Boating on the Rhein in Switzerland.”

While others may have their Oscars, Emmys, and Grammys, Video Club awards will henceforth be known as “Goldies,” following President Steve Carman’s special contest to name our statuette. From a range of monikers proposed, the Video Club Board of Directors chose Stephanie Brasher’s suggestion, “Goldie,” to honor both the Golden Rain Foundations (which provides our facilities and most of our equipment) and our club members. As Steve put it, “We’re all Golden Oldies!”

Emcee David Dearing (left) provided a jovial tone for the evening and set off conversations at many tables by taking a quick survey to determine the tablemates’ picks for “best picture” in the upcoming 91st Academy of Motion Picture Arts & Sciences Awards (to be broadcast by ABC live on Sunday, February 24). Our winner: Green Book.

After enjoying drinks and conversation with piano stylings by Mark Hochberg — followed by a delicious dinner served by Jolanda with wine at every table — banquet guests viewed 10 videos entered in the club’s Annual Short Video Contest. Members present then voted to choose the winners. Topics of the videos, all member-produced and four minutes or less in length, varied from travel to humor to information. Techniques included special cartoon effects and animation.

At left, first-time entrant Kathie Hein with the bags where members put their voting tickets.

“This (video editing) is really hard work!” Kathie observed on one of the closing titles in her entry, a New Zealand travel video. 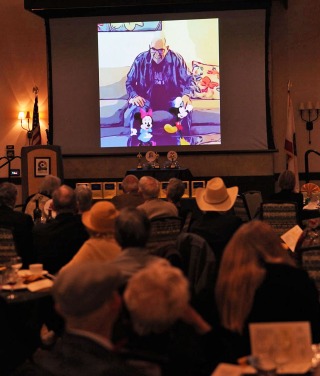 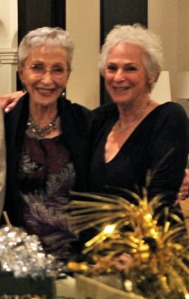 Photo portraits of guests plus candid shots were taken by Andre Torng, with additional photography by Stephanie Brasher. At right is a portrait of Norma Benner with husband Neil and family members. All photos are available online for viewing and downloading. See links at top of page.

To open the photo galleries below, click on any photo. To close it, click “X” in upper right corner. 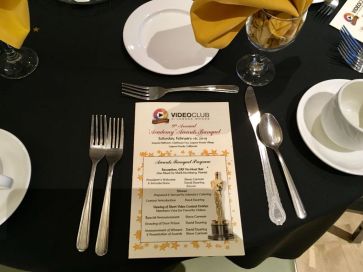 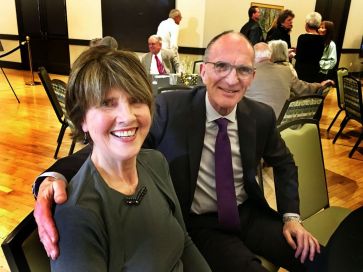 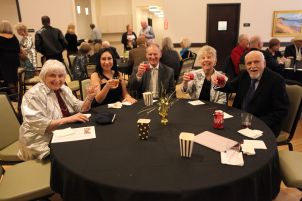 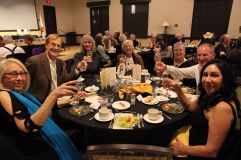 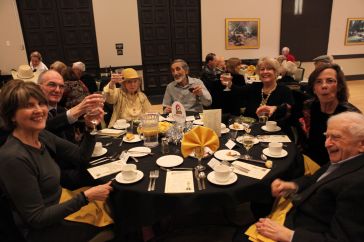