Below is a video of the evening’s program (video and audio by Jim Rohrs and Jack Crawbuck, editing by Lucy Parker)

Jeff Parker has been at Laguna Woods Village as CEO/ President of Village Management Services Inc., since last February. “I have a clear understanding of what you do here,” he says, “and I support you all.” Meet Mr. Parker and learn more about his vision for Laguna Woods Village at our next General Meeting on Thursday, January 16, 2020, in the Video Lab (located inside Gate 12 between Clubhouse 2 and the pool). Open free to all Village Residents and their guests. Snacks and socializing at 6:30 pm, program at 7 pm.

“I want to guide VMS through its continued growth as a first-class service organization with the best and brightest individuals and have fun doing it,” he states, adding, “I believe if we work hard, respect each other, and have fun, we will achieve success. Please stop by and say ‘Hi.’ I have an open-door policy.”

After graduating from from the University of California, Santa Barbara, Mr. Parker, found his calling during his California State University, Long Beach graduate studies. Delving deeply into his interest in government, he earned a Master of Public Administration.

Previously Mr. Parker served as City Manager of the cities of Walnut, Claremont, Patterson, and, most recently, Tustin. He was instrumental in the expansion of Claremont Village and the beginning stages of preserving Tustin’s air hangers, but it is perhaps his tenure with Walnut that best prepared him to understand and address the issues of an active senior community like Laguna Woods Village.

“I believe my most significant accomplishments while serving Walnut include the city’s first and only senior center, which now offers a variety of programs and services for the active aging population, and Dial-a-Cab, which provides city residents discount travel to local retail and education venues, medical facilities, and more,” said Mr. Parker. 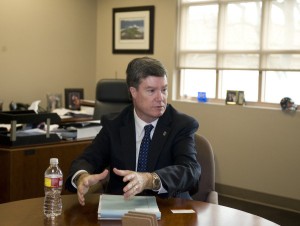 Mr. Parker strives to tailor his management style and philosophy after one of the most influential people in the history of our nation, Abraham Lincoln. In addition to the Great Emancipator, he admires Martin Luther King and Mahatma Gandhi. What these three great leaders share in common, the quality Mr. Parker lauds, is their ability to resolve conflict without violence.

More than 12 years ago, Mr. Parker survived a brain tumor that resulted in 50 percent hearing loss. His experience fuels philanthropy as a longtime tumor research donor— and propels him to embrace the philosophy of living life to its fullest. To that, he enjoys golf and travel in the US and abroad. Future plans include the very last state on his bucket list. “Alaska awaits!” he said.

Because of our 10th Annual Goldie Awards Banquet on Saturday, February 1, there will be no General Meeting in February. Our General Meeting on Thursday, March 19, will be an Open House, featuring the premiere of our second short dramatic video — “What? You, Too?” — wine, cheese, and other refreshments, and demonstrations in our Capture Center and Video Studio.