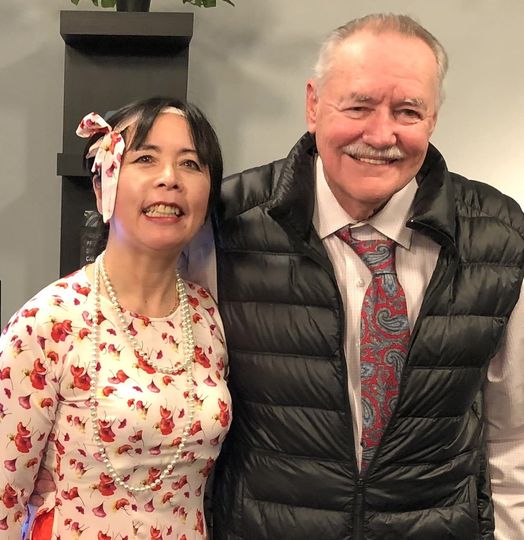 Longtime Video Club member Charlie Redner, who hosted “The Write Now” show on Village Television for many years with the late Judy Saxon, is launching his new monthly, half-hour TV show, “Writers & Readers,” in January. Produced in the Village Television studios, the new show airs Mondays on VTV at 10:30 am. “Writers & Readers” will be a boon for Village book-lovers when combined with the Video Club’s own new “Eyes on Books” show. “Eyes on Books” premiered in December, produced by member Suzanne Savlov and the Video One Productions team in the Video Studio and, so-far, has featured nationally-known authors via Zoom.

Charlie’s guest in January is Hong My Basrai. Her memoir, “Behind the Red Curtain,” says Charlie, “…is a remarkable story of how she, beginning at age 13, along with her mother, father, and three younger siblings, needed eight dangerous attempts to finally escape Communist Saigon between 1975 and 1982.” Charlie has created a Writers & Readers Facebook group to highlight his new show. For more info about the group, contact him through Facebook or at charlesredner@gmail.com.

“Beyond the Gates” Goes to Pasadena

In December, the Video One Productions team visited Pasadena to record the January edition of“Beyond the Gates.” The Video Club’s travel show takes viewers to local places of interest and airs on Village TV Wednesdays at 11 am and Sundays at 9 am.

The team first toured the Cheesewright Studio, which houses the Madeline Gardens Tea House. Edgar Cheesewright was an interior architect, and the Cheesewrigtht Studio is where he catered to wealthy clients. He also designed the interiors for the Greystone Mansion and Hollywood Roosevelt Hotel. The studio is a block-long, beautiful building, and tours are conducted on Friday, Saturday, and Sunday, both in the building and tea room, where tea is served.

The team next visited the Pasadena History Museum and the Fenyes Mansion, which still contains its original paintings and furnishings. Their next stop was the Bissell House Bed and Breakfast (former home of the Bissell vacuum family). A quick nine-minute walk from the Bissell house to the Storrier Stearns Japanese Gardens (below) concluded the trip.

“Beyond the Gates” is produced by Suzanne Savlov and was hosted by Susan Wheeler and Bill Hemberger. Jack Crawbuck is Director of Photography. (Photo by Jack Crawbuck)

In these days of Covid confinement, a good book can bring warmth and excitement into our lives. In January, the Video Club’s new show, “Eyes on Books,” features “The Henna Artist,” a novel by Alka Joshi (below, left), whose father, Dr. Joshi, is a Village resident. First reviewing the book and then interviewing Joshi via Zoom are co-hosts John Kelsall and Barbara Grear (photo below). “Eyes on Books” airs over Village Television on Mondays at 9:30 am and Fridays at 10:30 am.

“Eyes on Books” is produced by the Video Club’s Video One Productions team. Suzanne Savlov developed the new show and serves as its Producer with Dr. Tom Nash as Executive Producer and Jack Crawbuck as Director of  Photography.

“The Henna Artist, published in 2020, ” is Joshi’s first book and part of a series of novels she calls “The Jaipur Trilogy.” The second novel in the series, “The Secret Keeper of Jaipur,” was published last June. The third is under construction. Based on the life of Joshi’s mother, “The Henna Artist” took its author 10 years to complete. It was recently selected for review by the Reese Witherspoon Book Club and is being adapted into a Netflix series, to air in 2023 starring Frieda Pinto.

“Eyes on Books” is produced by the Video Club’s Video One Productions team. Suzanne Savlov developed the new show and serves as its Producer with Dr. Tom Nash as Executive Producer and Jack Crawbuck as Director of  Photography.

“Laguna Woods Stories,” produced by Video One Productions and hosted and edited by Dr. Tom Nash, features interviews with interesting Village residents. It airs Wednesdays and Sundays at 12 noon.

“Video Club Spotlight,” produced by Fred Harshbarger, features short videos by club member. It airs Sundays at 4 pm. Member videos to be seen in January are “A Shard of Glass” by Starkey, “Sauerkraut” by Gila Zalon, and “Spinning Dancer in Egypt” by Fred Harshbarger.

“Jazzing Around,” produced by Fred Harshbarger, airs Fridays at 8:30 pm, featuring 60-minutes of West Coast jazz performances, all shot by Fred. January’s show features “Rock around the Clock” with Gino and Todd Morgan, “Buddy Bolden Blues” with the On The Levee Jazz Band, “A Dreamer’s Holiday” with BED, “Boogie-Woogie” with Sonny Leland, “Any Old Time” with Tuba Skinny, and “Blue Moon” with the Woods Combo.