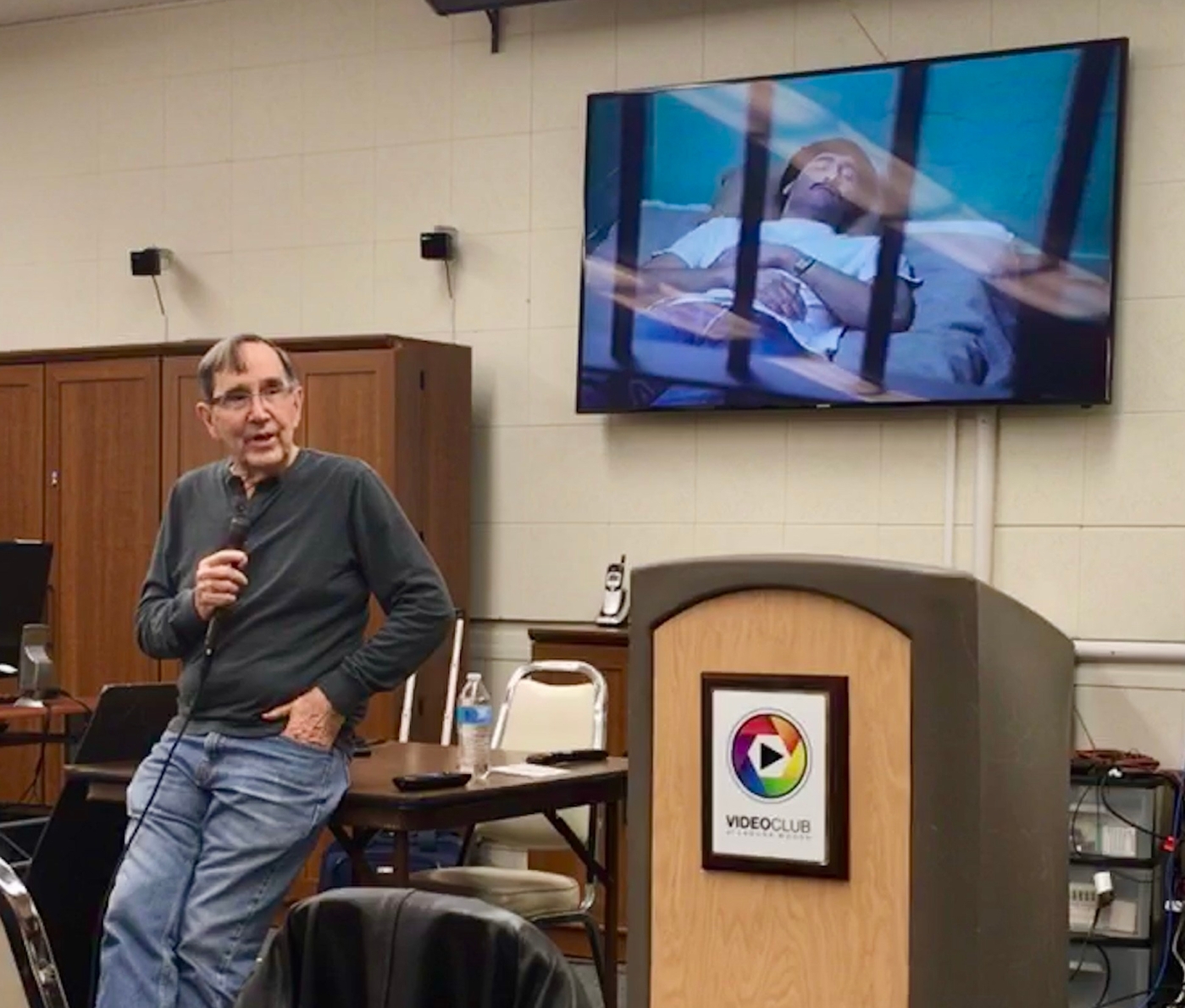 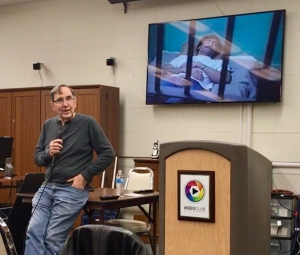 Video Club members and guests learned how an inspiring video grew out of one of the most heinous crimes in American history when Vice President Dr. Tom Nash spoke at the January 18 General Meeting on “The Making of a Docu-Drama” – a film about Manson Family member Charles “Tex” Watson. The 30-minute film was made by Biola University film students at the request of a local church some 20 years after the 1969 murders and is distributed by Calvary Chapel. Watson remains in prison today.

Tom described the project as “the most unusual and challenging film” he ever produced during his 26 years teaching film-making at Biola. The film was made on a tight time-frame during the inter-session between fall and spring semesters. It was shot on 16mm film using one camera with separately-recorded sound and was later transferred to video for distribution.

Closely following actual events, Tom and his students took a docu-drama (rather than a documentary) approach to the material, having Watson tell his story in flashbacks to a woman who came to see him in prison after his conversion to Christianity, which the filmmakers remain convinced is genuine. Tom explained that very little visual material was available about Manson family activities and the incidents leading up to Watson’s involvement. Furthermore, while they were allowed to interview Watson in prison, it was “almost impossible” to film him there.

Major roles were performed by Hollywood professionals (who readily work free on student films for the exposure, Tom explained) – but with one heart-stopping exception. The actor cast as Watson bowed out the night before filming was to begin. The team had to re-cast the role, using a sophomore student who had wanted to play the part. Adding to the drama, the student was in an automobile accident the night he was given the part, but he performed anyway, make-up covering his facial abrasions.

Finding locations – from mansion parties to ranch campfires to courtroom scenes – also posed a challenge to the Biola crew. Prison visiting room scenes were shot in the School of Theology student lounge. The story follows Watson’s change from a high school athlete raised in a church-going Texas family and voted by his classmates “most likely to succeed” to a college drop-out couch-surfing and smoking pot in Los Angeles. Adrift, Watson is drawn to the charismatic, guitar-playing Manson, who described “a better world outside the system” and drew his followers into circles “on the ragged edge of Hollywood,” sometimes including the Beach Boys and music producer Terry Melcher. On his first acid trip, Watson said he felt “unconditional love” from his new mentor. “We thought of it as a new religion with Charlies as our savior,” Watson recalls in the film.

Manson aspired to a singing career, and the actor who played him – conveying an impressive emotional range from tenderness to raging violence – did his own singing. “Fortunately,” Tom added, “he wasn’t a very good singer and neither was Manson,” although Manson described his original songs as “the hymns of the future.”

As Manson descended into less coherent messages, Watson left and then rejoined the family, where Manson was now talking about “Armageddon” and interpreting “song messages from the Beatles” which he said called for revolution to prevent the annihilation of the white race. The family began playing mock games about killing and broke into people’s houses – not stealing, just rearranging things – to “get over any fear” – while Manson warned them “Helter Skelter’s coming down.”

The film handles the murders with restraint. “We don’t show much,” Tom pointed out, “but the music, composed by a student, is really key.”

For a scene conveying Watson’s growing awareness and remorse over what he had done, the team needed “hardened criminals” attending a prison worship service. A group of former inmates called “Set Free” obliged, and a former prison chaplain was recruited and delivered a sermon that perfectly served the filmmakers’ intent – as the film moves to it’s powerful surprise ending.

“No one was killed in the making of this film,” Tom quipped.

The Video Club’s next General Meeting will be Thursday, March 15, at 6:30 pm in the Video Lab. Program TBA.

PHOTO CAPTIONS — At top (photo by Stephanie Brasher), Dr. Tom Nash shows scene of Charles “Doc” Watson in prison. Above right (photo by Barbel Dagostinono), External Video Coordinator John Kelly, with wife Alexandra Scott-Kelly, recorded Tom’s presentation. A library of past General Meetings on video is in preparation, to be placed on the club YouTube channel. DVDs may also be made available to borrow. Above (photo provided by Barbel Dagostino), “Academy” Awards Banquet chair Barbel Dagostino invites members and guests to attend the February 24 event, while Betsy Martin holds up a display of past banquet photos. Lucy Parker (left), presided at the meeting.