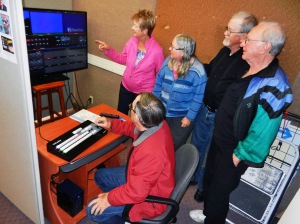 Many of you have been aware that we convinced the Golden Rain Foundation Board that the Video Studio would benefit by relocation of the Studio Control Booth to the adjacent Card Room.

The photo above shows Tom Nash demonstrating our video switcher in 2016, shortly after it was installed in crowded, makeshift “booth” in a corner of the Video Studio. Watching are club leaders (from left) Betsy Martin, Evelyn Chang, Chuck Hale, and Bob Kulpa. Photo: Lucy Parker

By removing the Control Booth from the Studio and placing it in the adjacent space, we can eliminate the background noise of the director’s voice instructing crew members via intercom headsets during shoots, while also allowing normal conversation in the booth.

At a meeting in January with Village Management Services executives, it was decided that we could take over the adjacent space. Sketches of the facility modifications were provided, and an estimate of the cost was generated. At the same time, the Video Club offered to pay for a sound system upgrade in the Video Lab. New powered speakers and supporting stands were purchased and installed in July, greatly improving our PA system in the Lab.

The estimated cost of the Control Booth relocation was higher than expected, and when presented at the August 8 GRF Maintenance & Construction (M&C) meeting, there were questions about possible reduction of cost. Maintenance & Construction Director Ernesto Munoz set up a meeting on August 16 in the Video Studio with a vendor in attendance. We discussed ways to reduce the cost of the job. The vendor will provide an updated estimate that will be presented at the next GRF M&C meeting on October 10. Ernesto asked that several representatives of the Video Club be present.

In the meantime, crews have been clearing and laying water pipe in the area behind the Video Lab, slated to become a “pocket park.” This will be a welcome addition to our environment, as were the two outdoor table-and-chair sets recently added to the patio between the Video Lab and Studio. And speaking of “environment,” we’re pleased to see purple pipes (indicating reclaimed water) going into the little park.

Construction is underway on the “pocket park” adjacent to the Video Lab. Photo: Lucy Parker