The COVID 19 shutdown canceled plans for a March 19 Open House and Premiere of the Video Club’s second short dramatic video, “What? You, Too?” At first, the production team waited, hoping to re-schedule a live event, but as the shutdown has continued, Village Television graciously premiered the video in July – and continues in August, each Saturday at 1:30 pm. Above, Director of Photography Jack Crawbuck shoots scene with Sarah Moscoe playing Maggie.

A 13-minute documentary by club member Fred Harshbarger, detailing how the dramatic video was made and featuring interviews with cast and crew, will be part of the TV-based premiere, showcasing fun and teamwork in the Village. The videos will air together to create a half-hour show.

This year’s emphasis on “a Village of Kindness,” encouraged throughout our community by the Thrive Task Force, will find new expression in “What? You, Too?” With edgy humor, the video focuses on kindness between some very different neighbors in a retirement community, showing how one resident overcomes prejudice and finds friends in a new environment. (Director John Kelly is shown above studying scripts with Eveline Hoffman, who plays Sallyann.)

Directed by John Kelly from an original script by Lucy V. Parker, the 15-minute comedy-drama features a cast of Old Pros members, led by 89-year-old Sarah Moscoe. Adjusting from her on-stage acting experience to the start-and-stop performance demands of film, Sarah portrays Maggie, a feisty East Coast transplant who resists the overtures of neighbors following her husband’s sudden death.

Other Old Pros in the cast are Sharone Rosen, Eveline Hoffman, Lewis Marcus, David Dearing, and Sheryl Stritch – along with residents Marjorie Gfeller, Juanita Tsu, and Rhonda Walker. Non-resident actor Andrew Jiggins appears as a speaker whose talk about opiod addiction prompts a big change. (Below Sarah Moscoe as Maggie talks on TV at night with her dead husband, played by Lewis Marcus.) 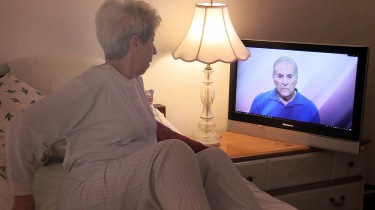 “What? You, Too?” was shot during November, 2019, in five locations. The popular local restaurant, Laguna Cafe, features prominently in the final scene. Special effects shoots in the Video Studio recorded the heroine’s dead husband, enabling her to chat with him at night on her bedside TV.