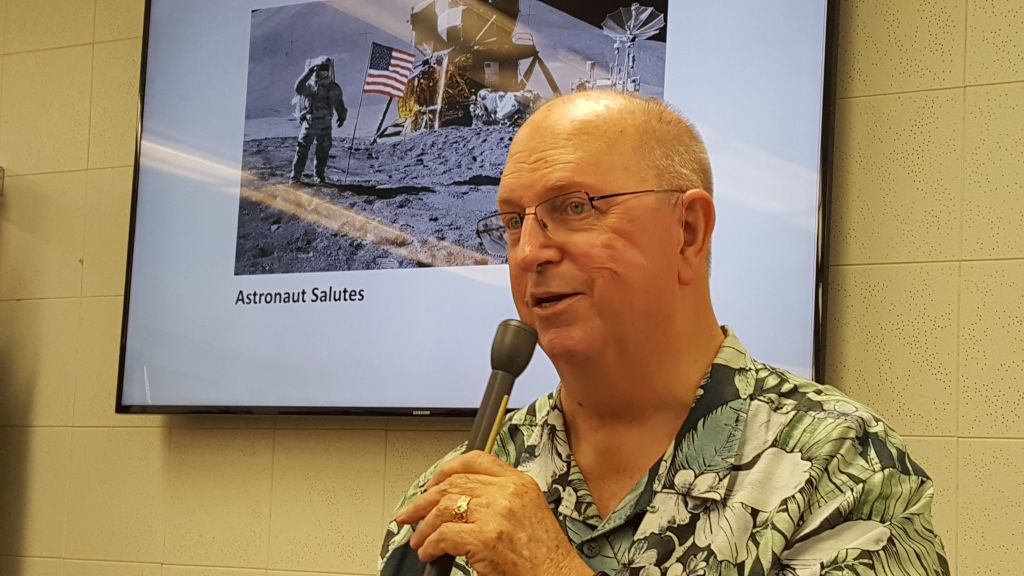 “The Critical Role of Video in NASA Space Projects” was explained in detail and with video examples by Video Club President Steve Carman at our April 19 General Meeting. Steve worked in engineering assignments on space projects, from the Apollo Mission to put man on the moon, through Skylab – NASA’s first space station, the Viking Mission to Mars, and the James Webb Space Telescope, during his 48-year career before retiring to Laguna Woods Village. The program was attended by a guest group of Steve’s former engineering colleagues, along with Video Club members and other residents.

Still photos by Stephanie Brasher and Lucy Parker. Steve’s presentation was video recorded by Dr. Tom Nash as part of an ongoing project to edit and upload some past General Meeting programs to our club YouTube channel. More details on these videos to come.

How Video Was Used
Among its uses in the space program: Video was shot at 400 frames-per-second to record point-of-launch information. “Capturing a launch in slow motion was very interesting,” Steve said, “especially in understanding failures.” Video was used to animate and illustrate engineering projects as they moved through phases of development with upgrades and changes. It was used to train astronauts and support personnel.. And, amazingly, it generated “live animation” – upending the notoriously-slow process of animation to create live, computer-generated images based on data coming from space, modeled in detail down to the correct positioning of shadows.

After receiving a mechanical engineering degree from UC Berkeley, Steve went to work on the Apollo (man-on-the-moon) Mission in 1965-67 where he trained astronauts since he “knew the equipment well.” From 1969-72, he worked on medical experiments with Skylab, a precursor to the space station, helping develop sleep monitoring methods as well as blood pressure measuring tools that led to equipment now in general medical use.

Sleep monitoring space posed a challenge, Steve acknowledged. The team developed webbed, phone-booth-sized containers where sleeping astronauts floated, wearing caps to measured their brain waves. Results were compared with brain wave measurements made on the ground “and we found it was pretty good sleep,” said Steve, adding that “Astronauts now use sleeping bags in space.”

In 1973, Steve worked on deploying solar panels for Saturn V rockets. From 1972-77, he also worked on the Viking Mission, NASA’s first trip to Mars. He described his role with a team that “had to find a way to sterilize the entire space craft” – extraordinarily difficult since “electronics hate heat.” On Viking, he also worked with scientists from many disciplines to engineer the experiments they wanted to conduct. One example of the practical problems the Viking engineers faced was windows being pitted by sandstorms. They had to find a way to clear or replace pitted windows in order to take photos. “The first color photos from space came from Mars,” Steve recalled, making the photo-taking process, already tediously slow, far more complex.

Measuring Effect of Clouds
Working for TRW from 1979-90, Steve was Project Manager on the CERES (Clouds and the Earth’s Radiant Energy System) Project, measuring the effect of clouds on climate. For Hyperion, from 1991-97, he was involved in hyperspectral imaging of earth. “You can find minerals if you know the spectrum you’re looking at,” he explained, adding that the mission unexpectedly turned out to be helpful to firefighters because it could reveal what roofs are made of. 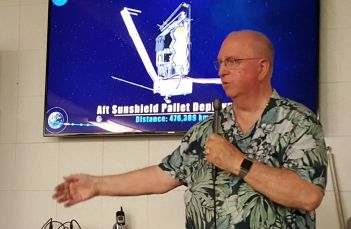 Steve illustrated his talk with video from the LCROSS (Lunar Crater Observation and Shepherding Spacecraft) project, looking for ice on the moon between 2006-09, where he was again Project Manager. The team received many awards for the discovery of water ice at the bottom of a lunar crater making it possible for a future space station on the moon since, he explained, “water is a key component for colonization of space as well as for making rocket fuel.” He added: “It helps us understand the evolution of the entire solar system.” How did Steve’s team identify water? They used a rocket to hit an ice target “the size of the Video Lab” hard enough to “pound up material we could analyze.” The spectrum they saw matched the spectrum of water. They also used video during the project, to explain what they were doing, he said.

Webb Space Telescope
During his 35-year career with TRW and Northrup Grumman, which acquired TWR in 2002, Steve worked from 1998-2002 on the James Webb Space Telescope (named after NASA’s second administrator). He shared a deployment sequence video of the project, which is currently planned for launch in May, 2020.

“The Webb Telescope is intended to replace the Hubble Space Telescope,” Steve explained, “but is designed to work very differently, all infrared for deep space exploration.” An adjustable mirror “three times the size of Hubble’s” is designed to avoid Hubble’s “fuzzy image problems” he reported, adding that the new telescope will also withstand much colder temperatures. “Keeping the spacecraft and instruments cool preserves energy,” he explained. Steve also recalled that the $8-billion, internationally-funded Webb Telescope project “was spending $1-million a day” when he worked on it.

Another video Steve shared during his presentation was of NASA’s InSight spacecraft scheduled to launch from the West Coast’s Vandenberg Air Force Base during this month (May, 2018) for a landing on Mars to study the red planet’s “inner space” – its crust, mantle, and core.

“Carmanization”
Steve’s work in the space industry taught him “a lot about scheduling and finishing early,” he recalled. In fact, he developed an approach called “Carmanization” – a term still in use today. Steve later taught risk management for UCLA and CalTech – providing techniques to identify and control risks. He also taught system engineers at Loyola Marymount and served as President of the Los Angeles Chapter of the Project Management Institute. Turning to the management of volunteers, Steve provided leadership training to residents of Manhattan Beach, where, during 1997-99, he borrowed from leadership programs in other cities and facilitated volunteers “coming together to pick a project to do for their city.”

All of his experience has stood him in good stead, Steve acknowledged, as he serves the Video Club for his fourth year as its President. Yes, it does take a rocket scientist – and we’re lucky to have this one!