“Don’t expect perfection, but try to get better and better as a filmmaker,” advised our September 20 General Meeting speaker, TARYN HOUGH, a young, Irvine-based videographer who became acquainted with the Village while making an award-winning documentary about resident Selma Bukstein – and who now plans a documentary about the Aquadettes as her next major project.

A self-taught videographer and editor, Taryn is also an actress. She got her start making “tongue-in-cheek horror films with a comedic edge” before producing “The Last Doll Lady,” which she screened as part of her presentation.

Now in her 90s, Selma Bukstein (in photo with Taryn above) has devoted much of her life to the educational program, Dolls for Democracy, which the national women’s organization B’nai B’rith started in the 1950s. For years, women volunteers nationwide took 12-inch, hand-made dolls depicting American heroes such as Abraham Lincoln and Helen Keller into classrooms to teach school children about democracy.

Taryn’s 21-minute documentary about Selma has won many film festival honors, and the filmmaker hopes eventually to see it aired on PBS. The video was shot on 17 days over a two-year period. Taryn ended up with 50 hours of footage.

Discussing documentary film techniques, Taryn listed six types of documentary films. They are poetic (experimental, non-linear), expository (straightforward, informative), observational (voicing all sides, often sharing intimate moments), participatory (including the filmmaker in the film), reflexive (focusing on the act of making the film), and performative (which she she likened to filmmaker Michael Moore’s style, using “his own personal stories as a way to construct social truths”). Taryn said she considers her style “observational” since she rarely inserts herself into her films.

Click here for Taryn’s handout on types of documentaries. 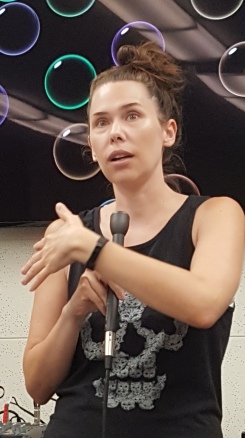 Taryn went on to discuss the importance of B-roll, building rapport with subjects, handling sound issues, camera equipment, special effects, and editing. She also provided a brief tutorial on getting into film festivals.

To illustrate the value of B-roll (incidental background footage) Taryn showed a segment of “The Last Doll Lady” with and without B-roll, making clear how much depth and texture B-roll adds – not to mention its utility in smoothing transitions from one shot to another. “I call it my magical helper when editing,” she said.

Stressing that rapport with one’s subjects is vital in making a documentary, Taryn urged: “Take time to get to know and understand them. Build trust.” To illustrate that special relationship, Taryn explained why it was so important to her for Selma to like the film. Even though the documentary shows Selma’s efforts to recruit new doll ladies as largely unsuccessful, Selma’s passion and sincerity shine through. “So many people had blown Selma off,” Taryn recalled, “she couldn’t believe a person under 40 was sincerely interested.” Taryn reported that Selma has recently found a new doll lady recruit, a resident of Apple Valley.

Because documentary filmmakers often lack full control of shooting situations, Taryn pointed out that capturing good sound can pose problems. “Arrive early and overly test,” she advised. “Wireless mics will give you the best quality, but you may have channel and feedback problems.” She suggested making backup sound recordings for safety.

Asked about her equipment, Taryn said her primary camera is a fixed-lens Panasonic camcorder which she considers “sturdy and better than a DSLR in low light,” but she also uses DSLRs. For the Aquadettes, she plans to use six cameras, including underwater gear. She added that, like many professionals today, she takes smartphone cameras seriously and, in fact, shot some of “The Last Doll Lady” with her phone. “Videos made on cell phones are getting into Sundance,” she observed, adding, “A lot can be done in color correcting.”

Speaking of  post-production, Taryn showed a 30-second video in which she added smoke and even rain to existing footage using Adobe After Effects.

Taryn said she taught herself to edit 15 years ago, “before the days of YouTube and Vimeo.” She works in Adobe Premier Pro. “I’m a note-taker,” she said. “I make notes of the best shots during shoots and watch the footage ASAP, cataloging it in a Word document. I note locations by time in order to find them later.” The length of any video, she advised, “depends on what you want to do with it.”

Getting into Film Festivals

Asked about her success getting “The Last Doll Lady” into film festivals, Taryn said, “You need to take it seriously. Look on it as a full-time job.”

She cited two main websites for festival information. They are withoutabox.com and filmfreeway.com. Both are free to filmmakers. Describing withoutabox.com as the less user-friendly of the two, Taryn explained that it’s owned by Amazon and linked with Amazon’s subsidiary, IMDB. This site lists most festivals, she said, and using it can result in an IMDB listing for the filmmaker. Taryn said she prefers filmfreeway.com, finding it “much easier to use.” These sites enable you to look up festivals by genre, location, and dates, she said. “To find the festival suited to your film, study festival websites,” Taryn advised. “Go on their Facebook pages. Find out what you have in common with them. Make contacts. Learn how it works. Submit where you fit – and be realistic in your expectations.”

“I never expected to get ‘The Last Doll Lady’ into Sundance,” Taryn said, but from 60 festival submissions, her film was accepted by 24. “Ten percent acceptance is considered good,” she noted.

Submission costs may range from free to $70, and the earlier you submit, the cheaper it will be, she explained, adding, “Expect more competition to get into the free festivals. They may receive 10,000 submissions.” As a caveat, Taryn warned, you cannot make your film available to the general public (on YouTube, for example) if you want it to be accepted into film festivals. You cannot air it on commercial TV or charge people to see it.”

“Some filmmakers,” Taryn observed, “know certain festivals very well and they only submit there, but you don’t grow as a filmmaker that way.” Instead, she advised, “Try to get your film seen as widely as possible. There is nothing more valuable to a filmmaker than having an audience watch your film. Even if you don’t get accepted,” she added, “you may get valuable feedback.”

Taryn Hough may be reached at tarynissuper@hotmail.com or through her company website, chainsmokingmonkey.com.