The three Centenarian Videos discussed below are already on YouTube, where family and friends of the centenarians and other non-residents may access them. Go to this Village Television channel playlist.

Each episode is introduced by GRF President Beth Perak, founder of the Thrive Task Force. The Village Centenarian Project was sponsored by the Thrive Task Force in cooperation with the Camera Club, the Video Club, and the VMS Recreation and Special Events Department. The project was launched Friday, June 28. See related post.

A playlist of “Discovering Laguna Woods” segments is available on the Village Television YouTube channel.

NOTE: Host Cyndee Whitney tells us that “Discovering Laguna Woods” will be visiting the Video Club in the near future. 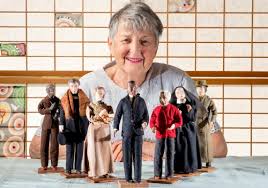 In August, “Discovering Laguna Woods” host Cyndee Whitney interviews “The Indomitable Selma Bukstein” (at right with some of her dolls). Join Cyndee as she explores the many facets of this inspiring resident. Now in her 90s, Selma is the subject of an award-winning documentary, “The Last Doll Lady,” by Irvine videographer Taryn Hough. The video describes the humanitarian work Selma and other women carried out for many years, sharing with school children the stories of American heroes, represented by dolls.

BTW, Taryn Hough spoke at the Video Club’s General Meeting on September 20, 2018, where she showed the dolls video. See our website post. Taryn is currently producing a video about the Laguna Woods Village Aquadettes.

WELCOME TO MY HOME – Mondays at 9:30 pm, Thursdays at 10 am – Producer: Video Club Member Susanne Savlov – Produced by Video One Productions

In August, “Welcome to My Home” visits the residence of John Kelly, who came to the United States from Australia. A Video Club member, John and his wife Alexandra (who came to the US from Germany) operate a professional videography company. John coordinates external video requests for the Video Club.

John and Alexandra are shown above during the a recent Video Club shoot.

BTW, Suzanne is seeking more participants for “Welcome to My Home.” See this recent post.

THE THRIVE SHOW – Thursdays at 9:30 am, Sundays at 10:30 am – Produced by Video Club Past-President/Instructor Scott Marvel

A playlist of “Thrive Show” segments is available on the Village Television YouTube channel.

On the August “Thrive Show,” Dorothy Pacella, Sandy O’Connor, and Cyndee Whitney talk about hosting their shows for Village TV.

A playlist of “Write Now” segments is available on the Village Television YouTube channel.

Charlie and Judy are taking a summer break. The next “Write Now” show will be seen in September.