A major upgrade of the Video Studio continues into the summer, according to Studio Manager Tom Nash, who also serves as our club Vice President and Learning Opportunities Director. Here’s what you need to know:

TWO STUDIO WORKDAYS WILL BE HELD
to clean and organize equipment and supplies
and we’ll need YOUR help!

DONATIONS ARE STILL NEEDED
in our 30th Anniversary Fund-Raising Campaign!

Since January, we’ve raised nearly two-thirds
of our $2000 goal – enough to buy the
three desks and four office chairs needed
in the Control Room/Classroom,
plus half a dozen stacking chairs.

Funds are needed for 12 more stacking chairs
for meetings, classes, and studio audiences.

To open the photo gallery below, click on any photo. To close it, click “X” in upper right corner. 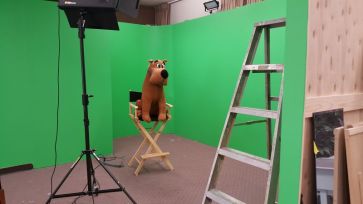 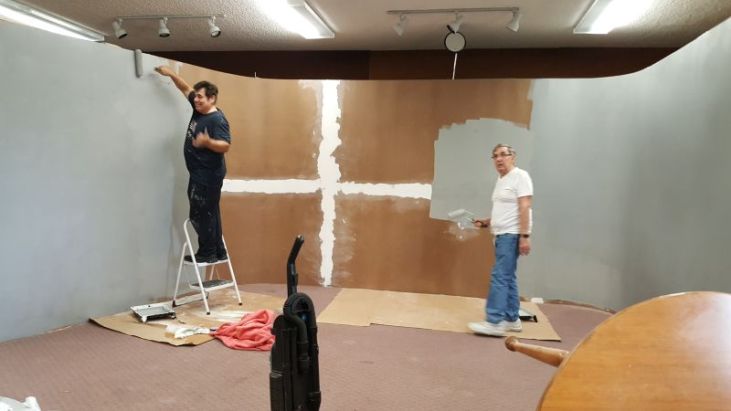 2019 Has Been A Big Year for the Video Studio

The Studio upgrade began last January with the opening of our new Control Room/Classroom and new light-lock entry. The effort coincides with the Video Club’s 30th Anniversary in 2019.

During June, Tom, joined by Equipment Manager Jim Rohrs and newly-appointed Assistant Studio Manager Jack Crawbuck (see related post), worked with paid handyman/carpenter George Strand to renovate both Studio sets. A $1400 budget of club funds set aside by the Board paid for labor and supplies – with massive amounts of volunteer labor from Tom, Jim, and Jack. Many thanks to all three!!

As a result, both our general-purpose set and our green-screen set have been upgraded! Unfortunately, a mountain of dust was raised by extensive sanding – something we may be dealing with for quite a while, Tom predicts.

The general-purpose set – which was built for the Video Club years ago by members of The Old Pros – has been relined with layers of 1/8” board to round both corners and eliminate visible imperfections. The set has been repainted a neutral gray, providing a backdrop for a group of multi-color LED lights donated earlier to the club by Scott Carman, son of President Steve Carman. When these lights have been installed, Tom explains, interesting background effects may be obtained in various colors.

The green-screen set, added to the Video Studio in 2016, thanks to Tom Nash, has been extended to the left to include the wall created by our new light-lock entry. The green background paper covering the was removed and saved for future projects. The wall on the right was also steadied. The walls were spackled, sanded, and painted green, providing a much-improved surface for chroma-keying. The wider set will also accommodate larger groups of talent. What remains, Tom explains, is to install permanent lights above the set for even background illumination – necessary to obtain optimal green-screen effects.

In other improvements, Jim has begun assembling “remote productions kits” – a long-sought goal for the members of Video One Productions. Not only will this equipment speed preparing for remote shoots, but it will eliminate disconnecting and reconnecting Studio cameras – with related performance problems. Even more important – it will allow remote shoots to be scheduled at the same time as shoots in the Studio. We have two matched camcorders for the kits and need one more, says Tom, adding that we have enough lights and stands but may need more tripods.

Tom and Jim have also been surveying Studio equipment and eliminating obsolete items.

2 thoughts on “Studio Workdays Planned in July and August”